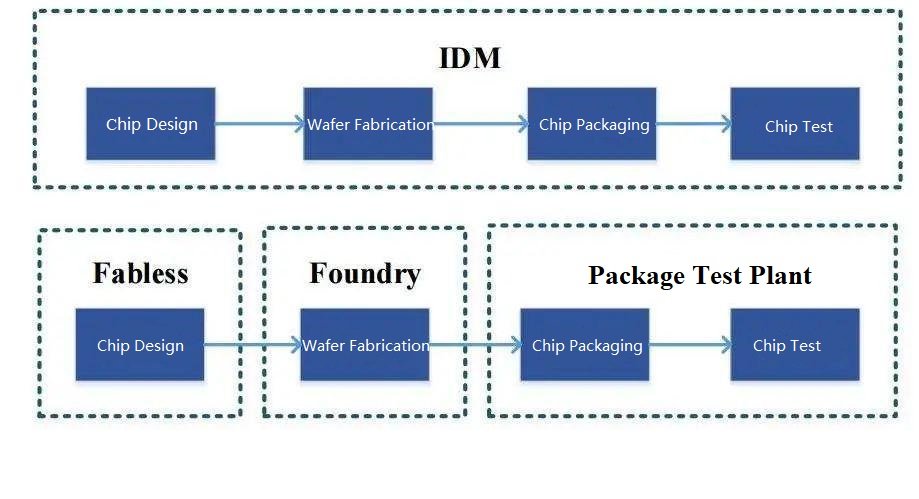 “Foundry”, in the field of integrated circuits, is a specialized manufacturer of chips

“Fabless” is a combination of Fabrication and less. It refers to an operation mode of integrated circuit design that focuses on design without manufacturing operations. It is also used to refer to IC design companies that do not own chip manufacturing plants. The term IC Design house is often referred to as Fabless.

“Wafer”, a complete Wafer, is made of pure silicon (Si). Generally divided into 6-inch, 8-inch, and 12-inch specifications

The wafer is first cut, then tested, and the qualified die is removed

Original chips: Wafers produced by manufacturers such as Samsung and Hyundai are graded according to capacity. Wafers with more than 93% capacity are called Class A, or A-chips for short. They are packaged and guaranteed by the original manufacturer.

Downgrade Flash chips: wafers with less than 93% capacity will be called downgrade Flash. They will no longer be reinfected with the reinfected label of the original manufacturer, which will be processed by some small packaging factories. Among them, the relatively sufficient and stable use is generally called white tablets. The price is usually 70 to 80 percent of grade A.

Black chips: the chip whose capacity is seriously insufficient and quality cannot be guaranteed is the black chip. Another part of the bad business of recycling waste flash chips is polished flash chips generally also known as black.

CP (Chip Probing): As the name implies, tests the electrical parameters of the chips. Each die on a wafer is tested to eliminate defects and reduce the cost of subsequent packaging

WAT (Wafer Acceptance Test): the Test of the special Test graph (Test key), through electrical parameters to monitor the normal and stable process of each step

FT (Final Test): tests the encapsulated chips. There are usually far fewer tests than CP because they have been tested before

Tape Out: The chip was designed and the design data was handed over to FAB to start production.

Wafer out: Wafer has finished production in FAB, the integrated circuit design has been manufactured on a silicon base, and the packaging test has begun

Mask: used to fabricate master plates of various levels of integrated circuits, such as N-well, active region, polysilicon, metal 1, through-hole, and metal 2…. Metal 10… These craft layers. The chip is the product of the precision superposition of the above layers.

Full Mask: meaning that all masks in the manufacturing process serve a design

Multi-project wafer (MPW) is a Wafer processing service that puts multiple integrated circuit designs with the same process on the same Wafer. Each design variety can get dozens of chip samples for experiments and verification tests in the product development stage.

The process & cost of Taping out

Foundry quotes are based on process and cast volume, single mask price.

Etching costs are lower than lithography at 28nm, whereas at present 14 and 7nm are mostly ionic etching

Then there are the costs of testing and packaging

MCU: Microcontroller Unit, also known as the Single-Chip Microcomputer (Single-Chip Microcomputer), is the Central Process Unit; CPU) frequency and specifications do appropriate reduction, and the memory (memory), counter (Timer), USB, A/D conversion, UART, PLC, DMA, and other peripheral interfaces, and even LCD drive circuit are integrated on A single-chip, forming A chip level computer, for different application occasions to do different combination control.

The System on Chip (SoC) is the brain of intelligent devices. It is a Chip circuit that integrates the key components of a System on a Chip to achieve complete System functions.  Digital IC design method based on sequential driving has been developed to design method based on IP core reuse and has been widely used in SOC design.  In the design of SoC (System on Chip) based on IP core reuse, the design of the on-chip bus is the most critical problem.