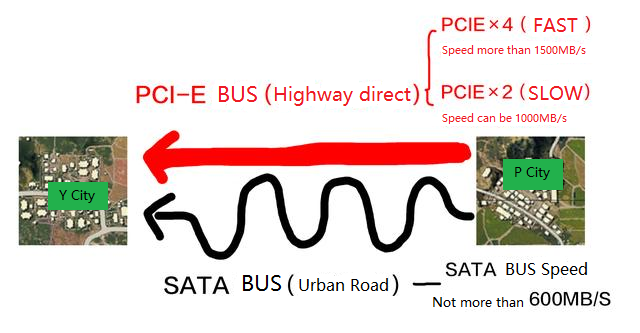 ▮ What are the differences between HDDs & SSDs?

Flash memory, which is used to store data in solid-state drives, is classified as SLC, MLC, and TLC, and are the most important parameters for selecting solid states.

So, each storage cell of the TLC Nand flash has to squeeze 3 bits of data. (Since MLC stands for multiple bits, including three, some vendors, such as Samsung, refer to their EVO solid-state drives using TLC particles as “3Bit MLC.”)

We think of storage space as a huge parking lot, where each storage unit is a parking space and a bit of data is a car.

If the storage space is a large parking lot, then the controller is the “administrator” of this large parking lot. He is responsible for directing every car to enter and exit their parking space accurately and reasonably.

For a parking lot of this size, especially a TLC pellet parking lot with three cars crammed into one space, the caretaker is very worried and tired every day. Therefore, the master “administrator” must have excellent physical quality (hardware) and solid management methods (firmware).

Good master brands are Marvell, SandForce, Samsung, Intel, Toshiba, and so on. In recent years, some of Taiwan’s leading brands, such as SMI and Phison, are also catching up.

When you have a lot of data to store, that is, many cars in the parking lot at once, the controller “administrator” is overwhelmed. But the CPU is very powerful: “I have sent so many cars (data) to you, you work slowly can not let me wait ah! I have so much to do!”

If there is no cache in the temporary parking lot, he will have to wait for the CPU, and we will feel “slow” and “card”, but if we have a cache so a temporary parking lot, the administrator can say, “I’ll spend the rest of the car in the parking lot of the temporary, I am in the busy eyes make arrangements for the car parking Spaces.” So the CPU can happily go about its business, we will feel the computer speed “fast”, “smooth”.

But the downside of caching is that if the hard drive is not protected against a power failure, the car may disappear. (Regular manufacturers will have power protection measures, don’t worry too much)

This is a technology that has only become popular in recent years. If you remember the parking lot, it makes sense.

The 3D stack is due to the increasing capacity of solid-state drives in recent years, so the density between the “parking Spaces” of each storage unit is increasing, so we have replaced the ordinary one-story parking lot with many-story parking lots. This way, there is less crowding between each parking space, and the interference changes, so the performance is better. And for manufacturers, the cost is lower.

Due to the rapid development of solid-state disks in recent years, new and old products alternate technology, so the solid-state disk interface, protocol, and so on in the market is a bit chaotic, there is a constant cut between them, but fortunately, I have a piece of knowledge to eat down.

A connector is a plug made of several electrically conductive copper wires in different shapes. The mainstream SSD interfaces on the market are SATA, mSATA, M. 2, and PCI-E slots.

In addition to the difference in appearance between them, there are also big differences in performance.

The bus is something we can’t see, can be understood as the data transmission “highway”, SATA bus, and PCI-E bus two kinds.

The PCI-E bus has several levels, PCI-E x 1, PCI-E x 2, PCI-E x 4, PCI-E x 8, and PCI-E x 16. The higher the number, the faster the speed. Current solid-state drives are all in the x 2, x 4 grade, which has a maximum speed of 3000 MB/s or more. Speaking of which, there are smart partners who may have thought of the graphics card we use is already x 16 level.

As mentioned above, PCI-E ×4 is a flat highway, but as we all know, in reality, the speed of each car on the highway is also different, and sports cars will always be faster than cars. SSDS with NVMe protocols is the equivalent of supercars designed specifically for this flat highway. In a PCI-e x 4 lane, a hard disk that does not support NVMe can run at most 1500MB/s, while a hard disk that supports NVMe can run at least 3000MB/s.

Relationship among Clusters, Pages, and Blocks

The disk capacity is calculated based on the following formula: Storage capacity = Number of magnetic heads x number of tracks (cylinders) x Number of sectors x number of bytes per sector