Differences between a surveillance hard drive & normal one?

Whether it's in retail, public transport, around corporate buildings, or public Spaces. Surveillance cameras are now considered essential in many places. 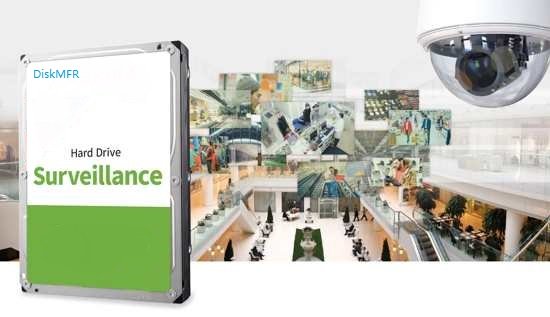 However, as the number of cameras increases and higher resolution video streams are available, so does the demand for the storage solutions used. As a result, HDD manufacturers offer special HDDs for video surveillance. DiskMFR explains the differences between these drives.

In video surveillance systems, hard disk drives typically operate 24/7. As a result, surveillance HDDs are designed for 24/7 operation and typically have an MTTF of 1 million operating hours, which corresponds to an AFR (annualized failure rate) of 0.88%. For example, in an installation with 1,000 drives, statistically about 9 drives will fail each year. On the other hand, desktop HDDs built for 8 to 16 hours of runtime per day typically only achieve 600,000 hours of MTTF. in continuous operation, this corresponds to an AFR of 1.46% and about 15 failures per year for 1,000 drives.

Video surveillance generates a lot of data that HDDs must store continuously, which puts a strain on mechanical components. As a result, surveillance HDDs are very powerful and can handle workloads of up to 180TB per year. Desktop hard drives with less access and handling less data volume are typically rated at only 55TB/year. When used in a video surveillance system, this amount of data is quickly reached and the probability of errors and failures increases rapidly.

HDDs in video surveillance often need to process multiple high-resolution video streams in parallel. Therefore, compared to desktop HDDs, surveillance HDDs include optimized firmware and larger buffer memory to ensure that all data is stored reliably and error-free – even for up to 64 HD streams. Simultaneous reads are no problem, and recorded video material can be read and viewed. However, if special AI evaluations are to be used, which in addition to high write loads also result in high read loads, it is worthwhile to use a more powerful enterprise-class drive.

Video surveillance systems are not always located in air-conditioned data centers or well-ventilated offices. As a result, surveillance HDDs are designed for a wider temperature range than desktop HDDs, so their components do not wear out as quickly. Typically, they can handle operating temperatures between 0°C and 70°C, while desktop HDDs are typically designed for a range between 0°C and 60°C, which is the range found in air-conditioned rooms and server rooms.

HDD manufacturers test their surveillance HDDs for a wide range of video recorder compatibility and functionality. This ensures that the drive works with the device. If you want to be accurate, check the manufacturer’s compatibility list or rely on a complete solution where an experienced integrator has equipped the system with the appropriate HDD. desktop HDDs cannot pass such tests in a surveillance system, so there is no guarantee that they will operate smoothly or provide optimal performance in the device.

In systems that need to provide a large amount of storage capacity, there are a large number of hard disk drives whose rotational vibrations can amplify each other. Therefore, high-capacity monitoring HDDs are often equipped with special sensors that detect these vibrations. Intelligent control mechanisms adjust operating parameters so that the impact is minimized and drive performance is not affected. Desktop HDDs lack these sensors and control mechanisms.

Companies should equip their NVRs and DVRs with surveillance HDDs that are designed to meet the demanding requirements of video surveillance,” DiskMFR Storage Products Division R&D Richie explains. “Desktop HDDs may cost less, but they can’t handle either continuous operation or high workloads. Companies that buy the cheapest products may find they have a higher risk of failure and, overall, higher maintenance and repair costs. “

PrevPreviousWhat is the difference between a PCI-E interface SSD and a SATA interface?
NextThe great trend of chip heterogeneityNext