What’s Principle behind Heat to Slow Down Speed of Phones?

In fact, reducing interference with cell phone signals from extreme weather is a daily task for experts. 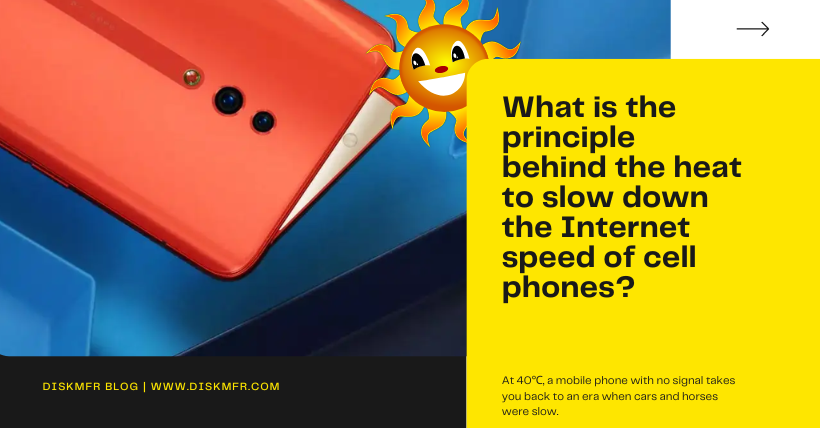 At 40℃, a mobile phone with no signal takes you back to an era when cars and horses were slow.

In fact, reducing interference with cell phone signals from extreme weather is a daily task for experts. There has been a scientific explanation for why hot weather interferes with mobile phone signals, mainly due to the phenomenon of atmospheric waveguides caused by hot weather.

This phenomenon usually occurs during the spring/summer transition period, summer/autumn transition period in inland areas, and winter in coastal areas. However, under the influence of subtropical high pressure, Hangzhou has sustained a high-temperature phenomenon recently, resulting in relatively high humidity in the near layer and relatively low humidity in the middle and upper layers, which is easy to form reverse humidity. At the same time, the inversion layer is also easy to occur when the temperature drops at night.

The refracted electromagnetic wave is reflected by the ground and then continues to propagate forward. This process is repeated many times so that it will travel forward between the ground and the atmosphere. Because this situation is similar to the propagation of microwave in a waveguide, it is called atmospheric waveguide propagation. Because OF THE TRANSMISSION characteristics OF the waveguide, THE WAVEGUIDE effect is more likely to occur between the plain and sea surface, so the suburbs, rural areas, towns, bottom residential areas, and expressways are more likely to be affected by it.

The commercialized 5G networks in China mainly adopt the TDD system. Because the upstream and downstream frequencies of the TDD system are the same, the interference problem between the upstream and downstream signals of the base station is mainly realized by setting the protection interval when the uplink and downline. However, when the atmospheric waveguide exists, the downlink signal of the distant base station still has strong power after the propagation distance from GP, which will cause co-frequency interference to the base station in the uplink receiving time slot at the near end, usually affecting the frequency range between 0.3ghz and 30GHz. However, China’s 4G 2.6GHz and 5G frequency bands (2.6GHz, 3.5GHz, 4.9GHz) are susceptible to waveguides.

Therefore, the existence of atmospheric waveguides mainly affects the propagation path and range of electromagnetic waves in the atmosphere, which leads to some special propagation characteristics in communication, detection, navigation, and other systems, such as radar beyond line-of-sight propagation and detection blind area, mobile phone signal instability and so on. Furthermore, the TD-LTE network in Haikou, Hainan Province, is interfered with by atmospheric waveguides for a long time, mainly due to the time-slot cross interference generated by the F-band and D-band of the TD-LTE network from Zhanjiang, Guangdong Province and Beihai, Guangxi Province.

How do telecom operators make moves?

Both 4G and 5G have frequency bands in the influence range of waveguides, which will inevitably interfere with large-scale 5G networks in the future. Interference from atmospheric waveguides is nothing new for operators. China Mobile Hangzhou branch has said that it is one of the most important daily works to deal with the influence of atmospheric waveguides on communication signals. At present, the staff of the China Mobile Hangzhou branch deal with the atmospheric waveguide mainly by active monitoring, quickly adjusting the signal frequency band in the area after finding it, and then adjusting back after the impact has passed.

Wang Qingmao, director of the wireless center of China Telecom Ningbo branch, said that multiple remote electromagnetic signals transmitted to the same place will produce a great interference to the local normal signal, serious interference will cause a series of serious problems such as dropped calls and low speed. The problem of atmospheric waveguide interference can not be completely solved by improving the ability of anti-interference, reducing interference sources,s and avoiding interference sources.

According to Wang Qingmao, the adverse effects of atmospheric waveguide interference on the base station can be properly alleviated by turning on the atmospheric waveguide suppression switch and different frequency networking. If there is a problem in the process of using the network, you can call the service hotline of the carrier of the mobile phone and ask technicians to determine whether it needs to be optimized.

Atmospheric waveguides are known to affect hundreds or thousands of cells at a time. It usually takes about an hour from discovery to adjustment. Since LAST July, HANGZHOU TELECOM HAS IMPROVED THE NETWORK PERFORMANCE SIGNIFICANTLY BY MODIFYING THE SPECIAL SUB-FRAME SLOT RATIO, AND THE subsequent REMOTE interference source is weakened, and the number of INTERFERED cells is significantly reduced.

In fact, 3GPP introduced the Remote Interference Management (RIM) feature into the 5G protocol in its R16 release, which was completed in June 2020, and device vendors are actively pushing to develop RIM features. In the future, to reduce the interference of the 5G atmospheric waveguide, the RIM function at the device level can be turned on to perform optimization operations such as real-time interference detection, avoidance, and regression, so as to suppress the interference influence of the atmospheric waveguide.

At present, the optimization measures of 5G anti-atmospheric waveguide interference include: adjusting the special slot symbol configuration, adopting the time slot ratio with more GP symbols, increasing the protection distance; Reducing the transmitting power of the remote interference cell; The antenna downdip Angle of the remote interferer cell and the near interferer cell is reduced. Massive MIMO value optimization, the downlink time slot before the S subframe is scheduled to the downhill beam user.

For the average user, the first reaction to a slow Internet connection or a weak signal may still be to look for the reason on the phone. Although we’ve talked about how high temperatures can interfere with cell phone signals, weak cell phone signals are a compound problem.

A few years ago, “mobile phone signal enhancement paste” caused a boom, the role of marketing as its name, attracting more than one hundred thousand people to buy, and this boom is making a comeback recently, the major shopping software search “mobile phone signal enhancement paste” can see the highest single product sales of more than one hundred thousand. Can a gadget with no electric power, no antenna connection, and even a low price of less than 10 yuan ($10) really do the trick?

In terms of material and structure, the signal-enhancing patch is a sheet of plastic coated with a layer of aluminum film, which is also printed with a layer of material similar to magnetic ink. Two years ago, CCTV tested the “signal enhancement stickers” and sent the popular online stickers at 20 yuan, 30 yuan, and 68 yuan to Theil Mid-range Laboratory of the China Academy of Information and Communication Technology. As can be seen from the product introduction of the signal paster, the principle of the signal patch is to enhance the signal acceptance range by lengthening the signal wavelength received by the built-in antenna of the mobile phone. Merchants claim that the mobile phone signal is posted on the front of the signal transmitting area, the opposite side is the signal receiving area, the antenna uses pure gold plated design, which can also effectively prevent radiation when strengthening the signal. But after the expert detection, the cell phone signal enhancement patch has no improvement effect on the cell phone signal.

If such one-size-fits-all “black technology” existed, operators would not have to deal with signal problems.

Words in the End

The climate issue is closely related to us. The interference of atmospheric waveguides to the signal of ordinary mobile phones is really disturbing. At present, the accurate detection of the atmospheric waveguides is still very weak, especially in the detection of regional and horizontal inhomogeneities. The research on its mechanism and diagnosis and prediction cannot meet the needs of the practical application of information systems.

There are bottlenecks to be developed and broken through in front of us, but with the gradual understanding of its principle, people have already used the atmospheric waveguide effect in communication countermeasures and other fields believe that cost-effective anti-signal interference solutions are not far away. Before that, you might as well make a personal contribution to environmental protection.