As the demand for storage efficiency continues to rise, most engineers are shifting their focus from traditional HDD solutions to better SSD solutions 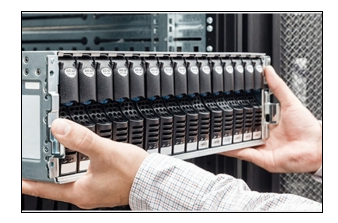 Enterprise SSDs have a variety of interfaces. The hard disk interface determines how many SSDs a server chassis can hold, their data transfer rate, and how long it takes to replace them without shutting down the entire system. Proper interface design is the result of thorough research combined with considerable expertise.

DiskMFR has designed a variety of interfaces to meet your needs, each with its own advantages and disadvantages. However, the most common types are box (SAS, SATA, and U.2) and card (PCI-based AIC and M.2). The same SSD has different performance levels depending on its shape.

SATA is considered one of the earliest enterprise solid-state drives that cost less than comparable products. The drive comes in 2.5-inch and 3.5-inch boxes and has a bandwidth of 6GT/s.

U.2, also known as SFF8639, is the most commonly used interface design. The design is boxed and supports 4-channel PCIe ports as well as SATA and SAS ports. It consumes 20 watts of power, is pluggable, and supports redundant storage, such as JBOD/JBOF. Up to 24, U.2 SOLID state drives are supported in a 2U server.

The expansion card is card-shaped and connects to a PCIe card slot on the server. It supports only Solid-State drives (SSDs) with PCIe ports. Unlike the U.2, the hard disk cannot be pluggable with power on but supports more than four PCIe channels.

Solid-state drives (SSDs) are mainly used in data centers. The interface is more compact than any other hard drive. It uses PCIe or SATA communication. Amphenol ICC’s U.2 can achieve 4th and 5th generation PCIe performance if used as an enterprise SSD. Similarly, 3/4 generation PCIe and m.2 provide 16GT/s performance, and 24 GB SAS provides higher bandwidth.

Solid-state drive designs are evolving all the time to keep up with higher and higher application requirements. Amphenol ICC is always one step ahead in developing the next generation of products, from its predecessors to its current products. Early solid-state drives used SAS 2.0/3.0 standards, while future interfaces will be based on SAS 4.0 and other advanced standards. Similarly, moving from PCIe 3.0 to 4.0 will meet the requirements of 4th and 5th-generation SSDs.

The EDSFF and NGSFF SSDs are designed to meet the requirements of storage servers and flash storage arrays running the 4th and 5th generation PCIe/NVMe storage protocols. The design is pluggable and has a dual-port interface to support redundancy, which is an effective replacement for M.2 in front-end service storage applications. EDSFF’s interface design supports 12.5mm slot arrays, while NGSFF SSDS can form 11mm slot arrays in Smaller Spaces. Both can be adjusted according to the heat dissipation requirements. EDSFF is designed to support three standard SSD profiles: 1U long, 1U short, and 3 “for different usage modes.

The high data transfer rate of 24 GB SAS makes it the preferred choice for future mission-critical storage applications. SAS 4.0 has a transfer speed of 24GT/s, which is comparable to the latest NVMe/PCIe SSD interfaces, and speed performance is comparable to NVMe SSDs.

It’s Leo Zhi. He was born on August 1987. Major in Electronic engineering, He is an Enthusiastic professional, responsible person, and computer hardware & software literate. Proficient in NAND flash products for more than 10 years, critical thinking skills, outstanding leadership, excellent Teamwork, and interpersonal skills.  Understanding customer technical queries and issues, providing initial analysis and solutions. If you have any queries, Please feel free to let me know, Thanks

PrevPreviousGartner: 7 Trends for Cybersecurity in 2022
NextHow is NVMe faster than SATA SSD?Next

What is PCI Express (PCIe)?