What’s wrong with UltraRAM in terms of Memory and Flash?

UltraRAM is load-based memory whose logic state is determined by the presence or absence of electrons in the FG. 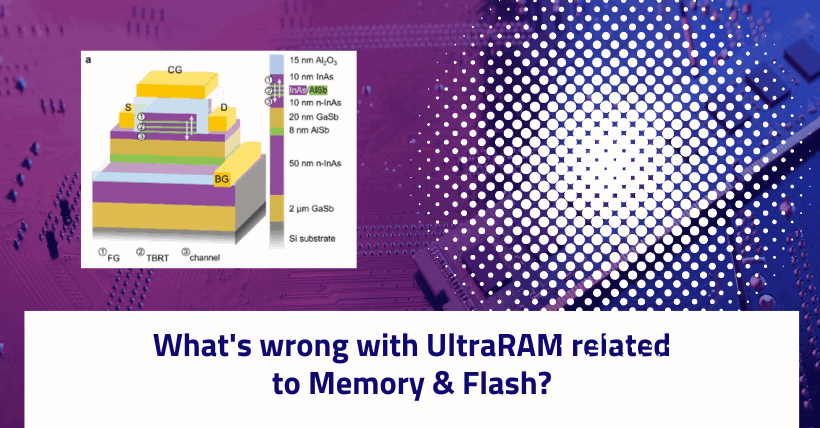 According to the Von Neumann Structure, memory is needed in computing devices, so the computers or smartphones we use today generally have two types of memory, RAM and flash memory. Among them, memory is fast, low-power, and durable, but does not retain data after power failure and is mainly used to run systems and software, while flash memory has a large capacity and does not lose data after a power failure, but it has one limited lifetime, lower power consumption and lower speed than RAM.

Can we combine the advantages of RAM and flash storage and use only one type of storage in the future?

The answer is, very likely in the near future.

Scientists from the Department of Physics and Engineering at Lancaster University in the UK recently published a paper describing a breakthrough in the mass production of UltraRAM, a memory technology that “combines the non-volatile nature of memory flash with the speed and performance Efficiency and durability of memory.”

What is UltraRAM and how does it work? Come on, follow the author and find out little by little.

In the past, high-speed, non-volatile memory with high durability and low power consumption was considered unattainable for a long time, since the physical properties of such devices are apparently contradictory. Traditionally, fast and highly durable memory always seemed to be a fragile and volatile logic state that even needed to be constantly updated, like DRAM (Dynamic Random Access Device); In contrast, a strong, non-volatile logic state requires a large amount of power support, gradually damaging memory structures and reducing durability, such as e.g. Flash memory.

The disadvantages of these two traditional types of memory have spurred research into a number of new memory technologies such as ReRAM (Resistive Memory), MRAM (Magnetic Random Access Memory), and PCRAM (Phase Change Memory), but as with traditional memory, the trade-off between Maintain logic state stability and performance.

UltraRAM breaks this paradigm by creating a triple-barrier resonant tunneling (TBRT) structure with InAs (gallium arsenide) and AISb (aluminum antimonide) quantum barriers. With respect to InAs, which form the floating gate (FG) and channel, the 2.1 eV conduction band shift of AlSb provides a barrier comparable to the silica media in flash memory for the passage of electrons. However, as shown in the figure above, the inclusion of two InAs quantum wells (of different thicknesses) in the TBRT structure can be transparent to electrons when low voltages (≈2.5 V) are applied due to the effects of resonant tunneling By using the TBRT heterostructure as a barrier between the FG and the channel instead of ordinary monolithic materials, charge-like memories with exceptional properties can be achieved.

UltraRAM is load-based memory whose logic state is determined by the presence or absence of electrons in the FG. The FG is electrically isolated from the control gate (CG) by alumina dielectrics and from the underlying channel by an InAs/AlSb TBRT heterostructure. The presence of electrons in FG, defined as the logic 0 states, consumes the charge carriers in the underlying N-type InAs channel and reduces its conductivity. So when a voltage is applied between the source (S) and drain (D) contacts, the state of charge of the FG can be read without loss by measuring the current through the channel. Therefore, the logical state of the memory can also be read. The last memory component is the InAs (BG) back gate, which allows voltage to be passed vertically through the gate stack for various operations.

The innovation underlying the memory is the TBRT structure, which, unlike a single-layer barrier, can be switched from a high-resistance state to a high-conductivity state with an applied voltage of ±2.5V. When the memory is in the locked state, i. H. when no voltage is applied to the device, the electronic ground states in TBRT QW are misaligned with each other, which is much higher in energy than the 300K electron pool in InAs FG and the channel layer. Because the QW ground state has unusually high energy for the resonant tunneling structure, nonvolatility is improved.

In the ultra-low QWs and ultra-low electron-mass effective bond state in InAs, TBRT provides a large barrier that prevents electrons from entering or leaving FG. However, an appropriate bias applied to the device tilts the conduction band so that the ground state of the TBRT-QW is aligned with the electronic states it assumes in the channel or FG. This allows electrons to move quickly in predetermined directions in the TBRT regime through the inherently fast quantum mechanical resonant tunneling process.

Due to the lower voltage required and the lower capacitance per unit area of ​​the device compared to DRAM, UltraRAM, with a characteristic size of 20 nm, is expected to have an extremely low logic state switching energy of 10–17 joules, which is two to three orders of magnitude smaller than DRAM or flash memory.

By combining the advantages of RAM and flash memory, UltraRAM could be a general-purpose memory that will one day meet all the storage needs of PCs and other devices.

According to the publication, UltraRAM offers “at least 1,000 years of data retention” and its fast read/write speeds and durability of scheduled erase cycles are “100 to 1,000 times better than flash memory.” Combine these qualities with the speed, power efficiency, and longevity of DRAM, and technology companies have a hard time missing out on this new type of memory.

Of course, talking about benefits doesn’t mean much. The key is whether it can be mass-produced and the cost controlled so that more people can use it. Lancaster University researchers say UltraRAM can embody heterogeneous structures in silicon. substrates, which is an important step towards low-cost mass production. Additional work is underway to improve quality, refine manufacturing processes, and implement and expand UltraRAM facilities, they said.

UltraRAM aims to bridge the gap between RAM and flash memory. Therefore, theoretically, we can use it as a single solution to meet the current storage needs of computing devices. For example, with 2TB of UltraRAM, no additional memory is required.

If a use case is successful, we can also expect UltraRAM implementation to expand to servers, smart devices, consoles, and more. However, it remains to be seen whether this new memory technology will be fast enough to outperform specialized fast memory types. like GDDR and HBM. So we’ll just have to wait and see.

The above content was adapted from the article “ULTRARAM: A Low-Energy, High-Endurance, Compound-Semiconductor Memory on Silicon” published by the academic staff at Lancaster University and is for reference only.