10 Tips to Protect the DNS Server

DNS software is a popular target for hackers & causes security problems. This article introduces 10 of the most effective ways to secure DNS servers. 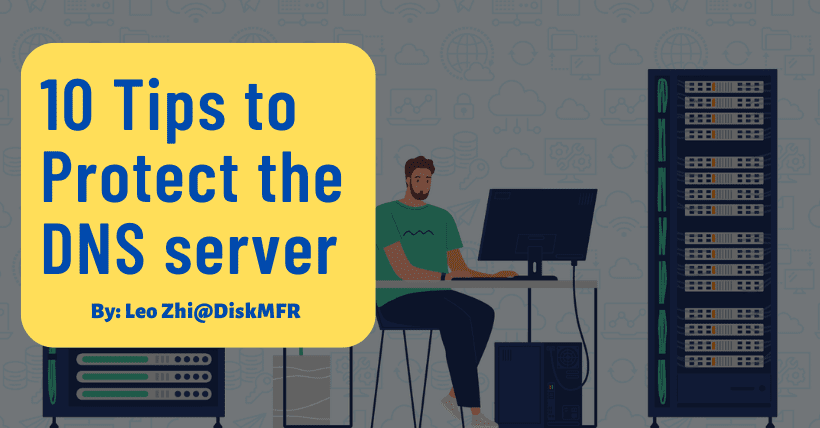 DNS software is a popular target for hackers and can cause security problems. This article introduces 10 of the most effective ways to secure DNS servers.

⑴ Use the DNS forwarder

Another benefit of using a DNS forwarder is that it prevents the DNS server from forwarding query requests to DNS servers on the Internet. This is important if your DNS server keeps records of your internal domain’s DNS resources. Instead of having the internal DNS server perform recursive queries and communicate directly with the DNS server, use a forwarder to handle unauthorized requests.

⑶ Use the DNS advertisers

DNS advertisers that are not DNS zone file hosted DNS servers are configured such that DNS advertisers only answer queries for their authoritative domain names. This DNS server does not recursively query other DNS servers. This prevents users from using your public DNS server to resolve other domains. Increased security by reducing the risks associated with running a public DNS resolver, including cache poisoning.

⑷ Use the DNS resolver

DNS cache contamination has become an increasingly common problem. Most DNS servers can cache the results of DNS queries before responding to the querying host. DNS caching can significantly improve the performance of DNS queries in your organization. The problem is that if your DNS server’s cache is “contaminated” with lots of incorrect DNS information, users can be directed to a malicious website instead of the website they intended to visit.

Many DNS servers accept dynamic updates. The dynamic update feature allows these DNS servers to register the host’s hostname and IP address via DHCP. DDNS can significantly reduce administration costs for DNS administrators who would otherwise have to manually configure DNS resource records for these hosts.

However, unrecognized DDNS updates can cause serious security problems. A malicious user can configure the host as a dynamically updated DNS host record for a file server, web server, or database server, and anyone attempting to connect to those servers will be ported to another computer.

You can reduce the risk of malicious DNS updates by requiring secure connections to DNS servers to perform dynamic updates. It’s easy to do by configuring your DNS server to use Active Directory-integrated zones and requesting secure dynamic updates. This allows all members of the domain to securely and dynamically update their DNS information.

Zone transport isn’t just for slave DNS servers, though. Anyone who can issue a DNS query request can effect a change to the DNS server configuration that allows a zone transfer to download its own zone database files. Malicious users can use this information to spy on naming schemes in your organization and attack critical service architectures. You can prevent this by configuring your DNS server to disable zone transfer requests or only allow zone transfers to specific servers in your organization.

Firewalls can be used to control who can connect to your DNS server. For DNS servers that only respond to queries from internal users, you must configure a firewall to prevent external hosts from connecting to those DNS servers. For a DNS server that only uses cache forwarding, you must configure the firewall to only allow queries from a DNS server that only uses cache forwarding. An important part of firewall policy configuration is to prevent internal users from using the DNS protocol to connect to the external DNS server.

On a Windows-based DNS server, you should set access controls on the registry associated with the DNS server so that only the accounts that need access can read or change those registry settings.

On a Windows-based DNS server, you should set access controls on the file system record associated with the DNS server so that only accounts that need access can read or modify files.

Only the system account should have access to the DNS folder %system_directory% and its subfolders, which should have full control rights.

PrevPreviousWhy is PCIe 5.0 SSD developing slowly in the consumer market?
NextWhat is USB Write Caching and how to disable it?Next