Why is PCIe 5.0 SSD developing slowly in the consumer market? 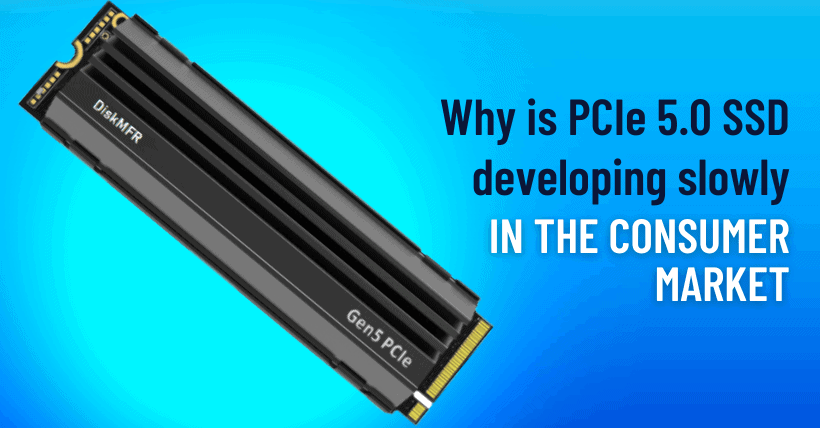 Over the past few years, there has been a lot of positive news about PCIe 5.0 technology in the enterprise market. Both major CPU manufacturers and storage companies are optimistic that PCIe 5.0 will replace PCIe 4.0 to provide higher performance for servers and data centers.

In the consumer market, however, major manufacturers have different attitudes toward PCIe 5.0 due to cost and other factors, and the progress of PCIe 5.0 SSD is relatively slow.

Recently, users exposed the specifications of 13 generation Core Raptor Lake and Z790 motherboard. The motherboard provides 5 M.2 slots, but neither the CPU is directly connected nor the Z790 chipset supports PCIe 5.0. The M.2 hard disk supports PCIe 4.0×4 at the highest.

The industry believes that there are few PCIe 5.0 SSDs on the market, so Intel Core 13 Gen does not support PCIe 5.0 SSDs.

Similarly, Samsung‘s latest flagship SSD 990 Pro doesn’t support PCIe 5.0 but still uses PCIe 4. Rumor has it that the new Samsung 990 PRO is a PCIe 5.0 product, but on August 24th, Samsung officially announced the NVMe SSD 990 PRO based on PCIe 4.0 technology.

Why did they abandon PCIe 5.0? Samsung said the adoption of PCIe 4.0 was based on market demand rather than development or technical problems.

▶ AMD is collaborating with 12 vendors to launch PCIe 5.0 SSDs

Compared with Intel and Samsung, AMD is relatively positive about the consumer PCIe 5.0 SSD.

In addition, AMD has partnered with 12 vendors to launch the PCIe 5.0 ecosystem, including Phison, Asus, Micron, Corsair, Crucial, Galaxy, Gigabyte, MSI, Seagate, and PNY, and the related PCIe 5.0 SSD is expected to be available in November.

▶ Words In the End

As AMD and other vendors continue to make efforts, more and more vendors will promote the application of PCIe 5.0 in the consumer market in the future, and the consumer PCIe 5.0 SSD market will continue to grow.