In this article, the author will take you to understand the purchase of solid state disks, and can pay attention to a few points. 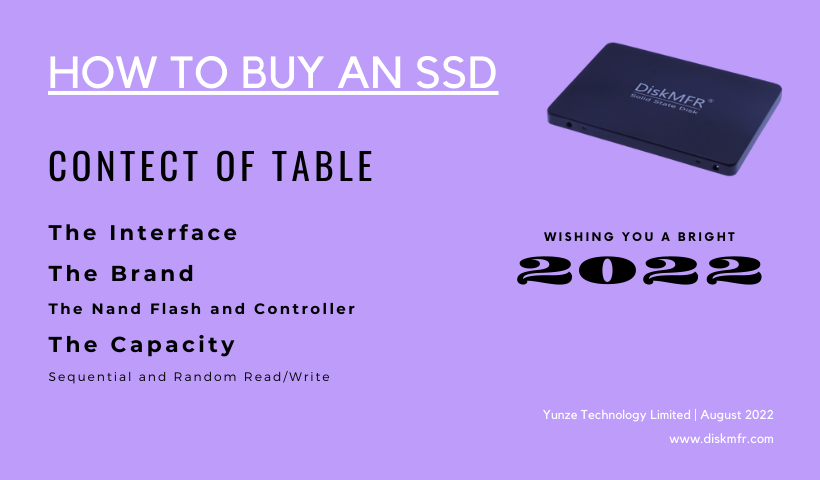 Speaking of solid state drives, you should know more or less. With the development of science and technology and the advent of games, animation, and other industries, the usage rate of solid-state drives in life is increasing, and installing a solid-state drive has almost become the standard computer configuration.

Therefore, in this article, the author will guide you to understand buying solid state drives and you can pay attention to some points.

SSDs have two main protocols: AHCI and NVMe. SATA3, M-SATA, M.2, and PCIe interfaces are also provided based on this protocol. The most common interfaces are SATA3, M.2, and PCIe.When comparing solid state drive quality, it’s more about protocols than interfaces. At this point, NVMe read and write speed is much faster than AHCI.

In terms of identification, the M.2 interface SSD can be both NVMe and AHCI, while the SATA interface SSD must be both AHCI. If the SSD is the NVMe protocol, the vendor will usually say so, since it’s obviously faster to use the PCIe channel, which can be a selling point. So there’s a relatively unofficial way to buy: see if the NVMe label isn’t all SATA channels.

The mark is an effective guarantee of the quality of Solid State Drives. Basically, the big brand manufacturers have their own main control chip and FLASH particle, which greatly reduces the possibility of buying “old discs” and counterfeit products.

The Nand Flash and Controller

Flash particles and controllers are the heart of the SSD and directly affect the performance and quality of the SSD.

Currently, the particles mainly include SLC, MLC, TLC, and QLC. The advantages and disadvantages of different particles are as follows: SLC> MLC> TLC> QLC. QLC and TCL particles are relatively cheap and of the poorest quality. , but they are the mainstream in the market today. MLC is one grade higher than TLC, has good stability, strong durability, and longer shelf life than TLC; SLC is currently the best particle, but the price is relatively expensive and the market is also smaller.

The main control of the SSD is analogous to the human brain, essentially a processor that directly affects the data in the SSD. A good master controller can improve SSD performance by leaps and bounds.

The larger the capacity of the SSD, the better the performance and the longer the lifespan. And of course higher prices.

But the author doesn’t recommend that everyone choose a large capacity or more to see their SSD usage needs: Easy upgrade? Save files? lol? If you are only installing one system, then the basic 120GB is not enough to buy 480G, 960G, and other larger capacities.

This point has been emphasized in the author’s previous SSD read and write tests.