”4K Performance”? Easy to see if your SSD is good or bad by it.

AS SSD will first continue to write to the tested partition in terms of the size of 16MB and generate a file that reaches the size of 1GB. 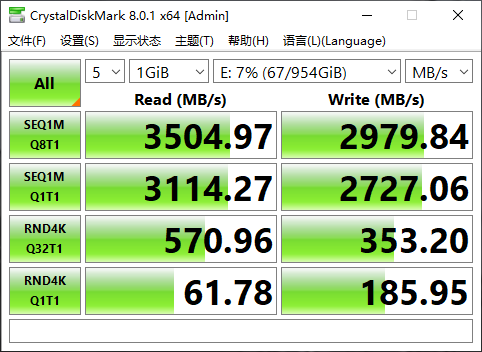 Reading Guide: AS SSD will first continue to write to the tested partition in terms of the size of 16MB, generate a file that reaches the size of 1GB, then read the file with the same unit size, and finally calculate the average score and give the result.
The test file will be deleted immediately after the test.

We often use AS SSD Benchmark when testing SSD.

Through this software, we can get some general information about the reading and writing of SSD.

However, some friends with high skills can judge the performance of SSD by the 4K reading and writing performance tested by this software.

Today we’re going to take a look at AS SSD Benchmark and the so-called “4K performance.”

AS SSD Benchmark is the software commonly used by many of us to measure the speed of SSD.
But many of us just look at the test data but do not understand the meaning of each test project, let alone the reading, writing, and application of SSD, which leads to some misunderstandings.

Let’s first take a look at the specific meaning of several test projects of AS SSD Benchmark.

Most rookies look at the continuous reading and writing speed during the test.
The rookie with higher skills is to look at 4K and 4K-64Thrd here, looking at the so-called “4K performance” to judge whether SSD is good or bad.

Let’s find out what 4K is

In daily applications, the writing of web page cache and the update of system files, including the loading and response of programs and games, are all closely related to the random 4K read and write performance. it can be said that the speed of 4K read and write determines the operation experience of the system.

So it is so important for 4K performance.

However, we mentioned above that the “4K performance” measured by, AS SSD Benchmark, is a random read-write performance with a single queue and a 64-queue depth.

However, the applications we use on a daily basis cannot only read and write randomly under a single queue depth, nor can they always reach 32 or 64 queues (this depth is often used on servers). In-home and small office environments, random reads and writes with a depth of 4-16 queues are generally dominant.

The 4K random read and write performance measured by AS SSD Benchmark is too one-sided.

Generally speaking, 4K performance is important, but the narrow sense of “4K performance” measured by AS SSD Benchmark is not very important and is for reference only.

Therefore, it is unreliable to see whether the performance of SSD is good or bad only by the so-called “4K performance” measured by AS SSD Benchmark.