It is well known that there are three types of CPU packaging: LGA, PGA, and BGA. 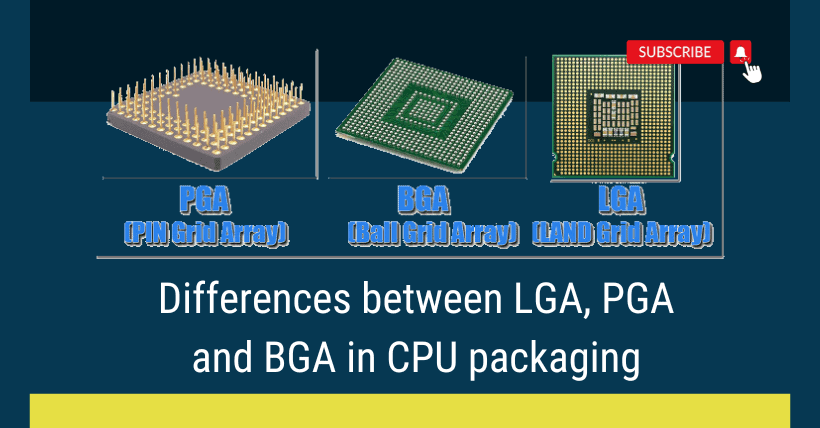 What does CPU packaging mean?

In general, the physical structure of a CPU consists of a wafer and PCB, in addition to other capacitors and other elements.

Why wafers are round is mainly due to the process and the convenience of cutting and using. Cutting out a small square is then a CPU on a wafer.

So you cut a CPU wafer, connect it to the board, and then with or without the protective cap, that’s a complete CPU. However, a CPU cannot work, it must be connected to the motherboard, so this way of connecting to the motherboard is called packaging.

CPU packaging types include LGA, PGA, and BGA. What are the differences between them?

Typically, this package is used by common Intel desktop CPUs. For example Intel from 775 all desktop processors, AMD Hao Long, Xiao Long, TR, and other processors.

Unlike the LGA, the PGA focuses on the pins on the CPU PCB, so you see a row of pins on the CPU and the motherboard only needs to provide pins to connect. PGA pins are stronger than LGA pins because they have to be moved many times. Even if the PGA pins are bent, they can be repaired relatively easily. It can be said that PGA is much better than LGA in terms of protection.

Currently, most Intel laptop CPUs and smartphone CPUs use this package. For example, all Intel processors ending in H, HQ, U, Y, etc. including but not limited to low voltage; AMD low-voltage mobile processors; All phone processors, etc.

BGA can be an extreme product of LGA, and PGA, and can be replaced at will, different from the characteristics of BGA once packaged, unless by professional instruments, otherwise ordinary players can’t remove and replace as usual but because it’s done once so BGA can make smaller and smaller volumes.

Technically, everyone wins and no one is the best.

There is no doubt that LGA and PGA are the main driving forces for us DIYers. But with the development of processors, especially in the mobile field. However, with the development of mobile processors, Intel has gradually abandoned the PGA package. For mobile processors after the fourth generation and switched to BGA packages, such a move will no doubt frustrate future DIY notebook gamers. just a waste of behavior.

But back to the package, these three packages are just one way of interaction between the CPU and the motherboard. And because it’s only one way, it means CPU BGA converts CPU BGA to PGA over a simple PGA PCB.

The emergence of this initiative undoubtedly means that BGA processors can shine again. Already in the second and third generations of core processors, there were BGA-to-PGA packages through PCB processors, it can be said that these processors have greatly enriched the DIY desktop CPU market.

But that’s also risky because, as mentioned above, BGA packaging can have quality issues and Intel’s own machines can have issues.

Well, the above is this scientific topic about CPU packaging, I think you can get some computer knowledge after reading it.

PrevPreviousThe Long Way to Localization of Lithography Machines in China
NextWhat are the features of the 4 kinds of USB Transmissions?Next