Effective Today! U.S. Cuts Supply of “Mother of All Chips” 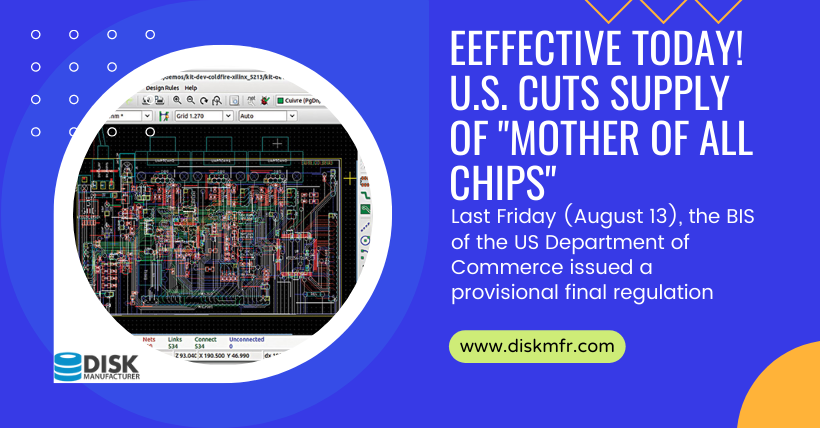 The most notable of the four technologies is “EAD software specifically for GAAFET transistor structure.” Earlier this month, foreign media reported that the Biden administration would impose a new export ban on EDA software for advanced chip manufacturing processes.

EDA supply cut, which chips will be affected?

EDA is an indispensable and important part of chip IC design. It is an advanced form of widely used technology. It belongs to the upstream industry of chip manufacturing and covers all the processes of integrated circuit design, wiring, verification, and simulation. EDA is known as the “mother of all chips” in the industry.

At present, the world’s EDA software is mainly monopolized by Cadence, Synopsys, Mentor, and other three American companies. The American Big Three, which dominate the EDA market and hold more than 70% of the global market share, are able to provide complete EDA tools covering the whole or most of the integrated circuit design and manufacturing process.

This time, the U.S. controls EDA software for GAAFET transistor structures. GAAFET is the key to achieving the 3nm and below technology node. Samsung is currently using it in the 3nm chip manufacturing process, while TSMC and Intel are rumored to be moving to 2nm by 2025.

Moreover, the only chips that will be able to afford GAAFET transistors in the short term are those that are very large, such as CPUs in PCs and mobile phones, GPUs in data centers, and AI chips. Such advanced transistors are unlikely to be used in chips in cars for a while, at least until costs come down.

In the short term, therefore, the ban by the US Department of Commerce BIS will not show much force. But depending on the chip renewal cycle, the export restrictions will continue to have an impact for the next 1-2 years.

Influence on our domestic chip development

EDA software of GAAFET structure is a link that all semiconductor companies cannot avoid after entering the advanced manufacturing process. This means that Chinese companies that need to use advanced processing chips, such as AI chip companies and mining chip companies, are likely to be stymied in designing chips with 2nm, 3nm, and below processes in the future.

However, 2nm and 3nm processes are the most advanced chip processes at present, and Chinese chip companies are still breaking through 5nm and 7nm processes, which will have little impact in the short term.

In the long run, the U.S. regulation of EDA software export based on the GAAFET structure will be like the “Three-body problem” in which the Three-body man imposed a blockade on the Earth, blocking the advancement of domestic chip companies in advance. Therefore, this is enough to make us vigilant, about how to break through the blockade of the United States to become the key to the development of domestic chips.

Some media analyzed that the U.S. technology blockade will further aggravate the trend of regionalization of the semiconductor industry. What started as a globalized industry requiring global cooperation is now an anti-globalization status quo due to disputes between various parties. This trend is growing not only in China, but also in Korea, Japan, and Europe. It seems to be a big issue across the industry to have more autonomy over more comprehensive technology.