Here are some common misconceptions and prejudices about SSDs

Myth 1: QLC is a scrap. QLC replaces TLC and TLC replaces MLC. Myth 2: HDD won't be all bad at once, a bad SSD will make all data be gone 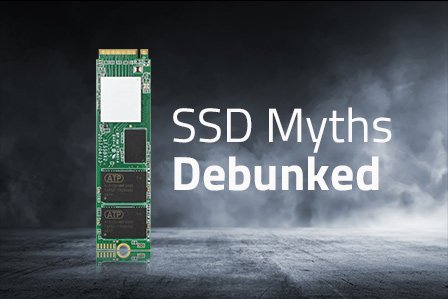 This is a completely wrong understanding, especially to emphasize that QLC is not a scrap, QLC is also like SLC, MLC, and TLC from the wafer cut down to the screen, test, and package.

In addition, QLC does not replace TLC, TLC will still be sold normally after THE official launch of QLC, and there will still be many TLC options for you to choose from. According to the current market price, there have been QLC products on the market, but the price of TLC has not been raised, and still maintains a downward trend. Because the price is not only determined by the type of particle, but also by factors such as capacity, industry circulation cost, demand, brand strategy, etc., the final price you see is the result of a combination of many factors. It’s not impossible that QLC will be more expensive than the old MLC if global particle production plummets one day due to heavy rain and flooding, right? If you don’t buy, there are always others who need to buy, which is the result of market regulation.

QLC is more to replace HDD, basically, there will be a trade-off phenomenon, this is the general trend. As for the replacement of MLC by TLC, this is only the phenomenon you see in consumer products, not the real reason at all. In the past, the process and technology of fabs could not mass produce TLC particles, so THEY had to use MLC as a storage medium. Based on the current capacity, MLC is not enough to support the exploding global demand for NAND FLASH storage. Take mobile phones as an example. Five years ago, the standard configuration of high-end mobile phones might be 16GB of storage, but today the standard configuration is 128GB, and the number of mobile phones is getting higher and higher. Various smart products also need storage, and the limited wafer capacity must bear the explosive demand.

Myth 2: HDD won’t be all bad at once, a bad SSD will make all data be gone

In terms of storage mechanism, HDDs are more likely to recover data than SSDS, but it does not mean that HDDs are 100% able to recover data and SSDS are 100% unable to recover data, which is the essence of the myth. HDDs can be broken and disappear directly, and SSD can also be broken and can be repaired, but this is not absolute. It is also impossible to recover (or difficult to recover, with only a small amount of data) if the HDD is damaged due to severe vibration or poor spindle quality. For SSD, if only the controller is broken and the NAND Flash is ok, there is also the possibility of recovery, (if the NAND flash is broken, of course, the possibility of recovery is very low).

But open data recovery, basically is not what ordinary consumers can do, only professional institutions operate, the price may not be cheap, and is also not guaranteed to restore (Don’t tell me you accidentally deleted a photo and scanned it with software to restore it, not at this level), or more ways to back up important data, You have an HDD with what you call your most important data? KIDDING ME?

Back up your important data. NAS, DVDs, HDDs, and cloud disks. Use two or three of them to make sure your data is important.

Myth 3: If the controller chip of the SSD is broken, it’s over

In fact, when the controller is broken, data can be recovered. The data is stored in the SSD chip (the main components of SSD are CONTROLLER + NAND flash + CACHE +PCBA), in which the chip is the storage medium. Some users’ controller is broken and did not go to data recovery, but insisted that the bad is over, the fundamental reason has actually overestimated the importance of their own data, The thought of data recovery is too much trouble, data recovery costs too much, and stop. In fact, if this had happened on HDDs, they would not have done data recovery either.

Everyone has a hidden scale in his heart. Data is put on the left side and cost is put on the right side. Cost includes time, energy, and money. Once the two sides have to be weighed, you’ll find that the data that you thought was important isn’t as important as you thought.

Myth 4: If 90% of the firmware has been written, will the remaining 10% be overwritten and damaged prematurely?

Won’t the controller manufacturers think of this problem? This problem was solved years ago. The SSD controller has a wearing-balancing mechanism. This is a fundamental feature that all the manufacturers have introduced. It dynamically monitors the leveling of each block and even when it is 90% full it will move the data when it is idle so that all-flash blocks will be polished the same number of times.

So I hope you don’t have to worry about whether the remaining 10% of your SSD will die early after 90% of it is written, which it won’t because 90% of the data is not lying still in that position.

The same goes for garbage collection, TRIM, bad block management, error correction, etc. These technologies have long been a basic feature of SSDs. Experienced users may remember that SSDS didn’t even support TRIM in the past. However, there are few SSDS that do not support TRIM.

Myth 5: Didn’t storage types get cheaper when they went from SLC to QLC?

Myth 6: Abnormal shutdown SSDs are more likely to be damaged than HDDs?

This starts with how HDDs work. If data is being transferred, the HDD bald head will write 0101 on the disk. If the power is cut off at this time, the bald head may not be able to pull away from the disk in time, which has been pressing the disk damaged part of the track, resulting in a bad track.

SSDs do not have such a physical structure, so a power failure will not cause similar physical damage to the NAND Flash, but more data logic errors. And if you want to do power protection, SSD is easier, as long as the increase of some charging capacitor can be achieved, the principle is not difficult, many of server SSDs have been applied.

Myth 7: The speed of HDD is better than that of QLC SSD?

This is actually the rumor a lot of people have said, QLC SSD speed is slower than HDD? No, this can only happen in extreme cases, because QLC SSDs are actually faster than HDDs in most cases due to the advantages of SSD caching. A 500GB QLC SSD, for example, will be faster than HDDs unless you sequentially write more than 15GB of files one time, but will indeed be slower than HDDs, with only 80-100MB /s, once the cache is out of speed.

So, if you have a daily/every few days need for continuous high capacity writes, skip QLC SSDS and consider TLC, which is also faster than HDDs after full cache writes. And the QLC SSD’s advantage over HDDs is not limited to continuous reading and writing speeds, but 4K speeds are the reality of the split-second HDD experience.

② Under the situation of voltage instability, HDDs are more likely to fail than SSDs.

④ No matter how old SSDs are, the experience is much better than HDDs.

The purpose of this article is to dispel some of the inherent and incorrect perceptions about SSD and to dispel some of the relatively widespread rumors. If you still have doubts, please leave a comment in the comments section. We welcome harmonious and friendly questions based on the premise of discussion and exchange.

In addition, if you want to know something about the computer field, but you don’t know much about it, you can also say, we can open a new article to answer your questions.