How to determine NAND Flash quality？ 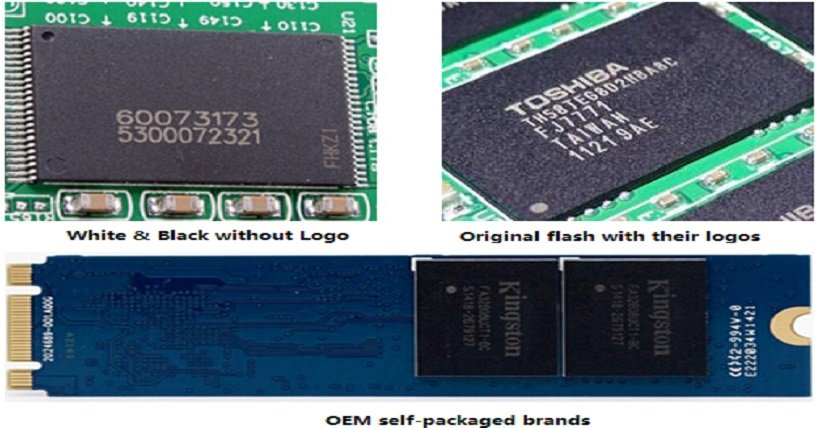 Distinguish the original piece, self-packaged brand, original factory quality brand, white piece, and black piece first to understand the chip production process, Wafer is made into the Wafer slice test stage, will be divided into Flash Die qualified and unqualified, and the original factory will test qualified Flash Die packaging, Unqualified Wafer are some leftover materials, which the original factory will scrap, and many of them will flow to the downstream sealing factory in the form of blue film Wafer for processing and recycling, known as black Ink Die, and finally used by some small manufacturers for cheap bundled SD cards and U disk and other products. Due to poor quality and performance, SSDs and EMMCs are not used in most products, but a few manufacturers produce SSDs with black chips and sell them to the market for huge profits.

Qualified Flash Die original packaging factory will be packaged into eMMC, TSOP, BGA, LGA, and other products according to needs, but there are also poor packaging, or performance is not up to standard, these Flash particles will be filtered out again, or flow to the downstream manufacturers, the downstream manufacturers after screening. Flash particles are printed with a non-original logo and sold. In addition, the original factory sells Flash Wafer of consumer-grade to card module factories. These factories don’t have testing technology and directly ask the sealing factory to select Good Die packaging particles according to Mapping.

PrevPreviousWhether data will be corrupted by an ABNORMAL SSD power failure
NextRussia launched SSDs that use its own Controller & can reach 1.5GB/sNext