What is RAM Timing? same as Frequency?

What is RAM timing, and how does it affect RAM performance?  DiskMFR takes a look at this RAM parameter. 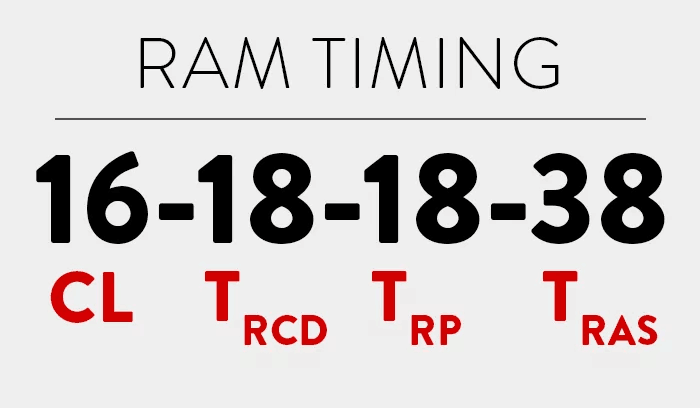 Timing affects the latency between various common operations on a memory chip. If the latency exceeds a certain limit, the performance of memory will be affected.  In a nutshell, the timing of memory is a description of the inherent delay that an internal entity may experience when performing its various operations.

RAM timing is measured in clock cycles. You may see a string of numbers separated by dashes on the product page of a memory stick, such as 16-18-18-38, and these numbers are called memory timings. Essentially, since they represent latency, the lower the timings, the better. These four numbers represent the so-called “primary timing” and have the most significant impact on latency.

After reading the above, are you more confused? Don’t worry, let’s take a simple example to talk about it.

We can imagine the memory storing data as a grid, and each square stores different data, and the CPU issues the corresponding instruction to the memory for whatever data it needs.

After determining the number of rows and columns, the target data can be found accurately, so CL is an exact value and any changes will affect the location of the target data, so it is one of the most critical parameters in the timing and plays a pivotal role in the memory performance.

The third parameter of RAM timing, tRP, is the time required to wait for another row after one has been determined.

The fourth parameter, tRAS, can be simply understood as a time for memory to write or read data, and it is generally close to the sum of the first three parameters.

Therefore, the lower the memory timings the better, provided that stability is guaranteed. However, we know that many memory sticks are now able to overclock, and high frequency and low timing contradict each other, generally frequency up, and timing will have to be sacrificed, in order to have low enough timing, frequency, and difficulty to pull up. For example, in the DDR5 memory released by major storage manufacturers this year, the frequency did go up, but the timing is also relatively DDR4 memory a lot higher.