What’s Thunderbold 4? Differences Between Others

USB4 is integrated with Thunderbolt 4. How is USB specification different from previous compatible buses such as TB4, TB3, USB-C, USB4, & USB3? 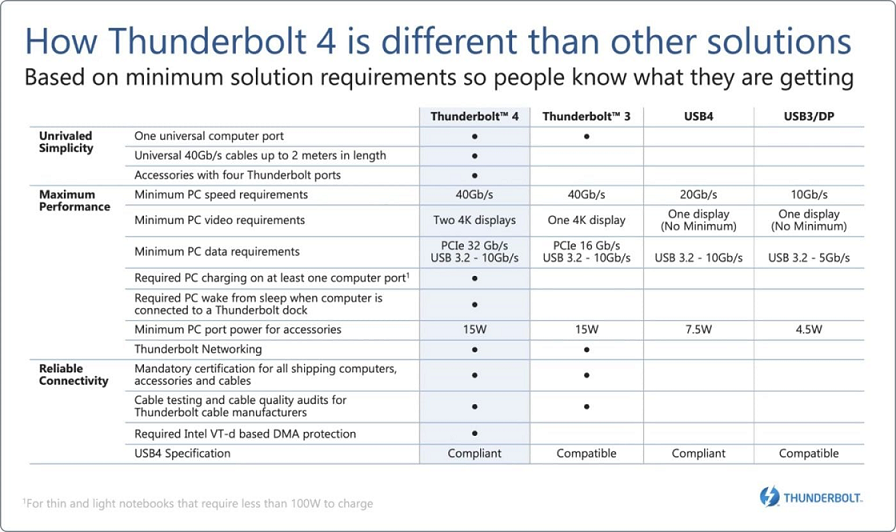 USB4 is integrated with Thunderbolt 4. How is the new USB specification different from previous compatible buses such as Thunderbolt 4, Thunderbolt 3, USB-C, USB4, and USB3?

Thunderbolt is a high-speed protocol developed by Intel that provides power and dynamically adjusts data and video bandwidth based on usage. It is now the basis of the USB4 specification.

Thunderbolt 4 and USB4 products will use the same underlying protocol specifications to improve the overall compatibility of USB-C-using products. However, TB4 (Thunderbolt 4) pushes USB4 to the next level by providing a more complete version of USB-C and superset features that USB4 doesn’t need.

First, Thunderbolt 4 will be USB4 compliant and maintain the industry-leading 40Gb/s performance of its Thunderbolt 3 predecessor. But there are some big changes.

For example, the MacBook Pro (13-inch, 2016, four Thunderbolt 3 ports) has two 40Gb/s ports on the left and two 20Gb/s ports on the right. This means that specific ports limit PCIe speeds to 16Gb/s and support only one 4K display. For Thunderbolt 4, this is not allowed – all four ports are required to be 40Gb/s.

In addition to the expanded features listed above, Thunderbolt 4 still requires mandatory certification of all shipped computers, accessories, and cables for a consistent user experience, regardless of product or manufacturer. It will also maintain compatibility with USB 2.0, USB 3.2, USB4, DisplayPort, and PCIe.

Over the years, we’ve seen USB data rates increase from 5Gb/s to 20Gb/s, and USB4 speeds can reach 40Gb/s. However, unlike the USB4, its top speed is optional, and Thunderbolt requires it.

One port for all your needs! Well, at least the mark. Gone are the days of jumbled symbols on accessory ports that look like the same connection. Instead of this:

In Thunderbolt 4, you only see a Thunderbolt logo, and you know that it works with any supported protocol.

Thunderbolt 4 cables will also be universal, replacing all different cables with a simple Thunderbolt logo and the number “4”.