Why not buy SMR Disk? And the difference between SMR and CMR 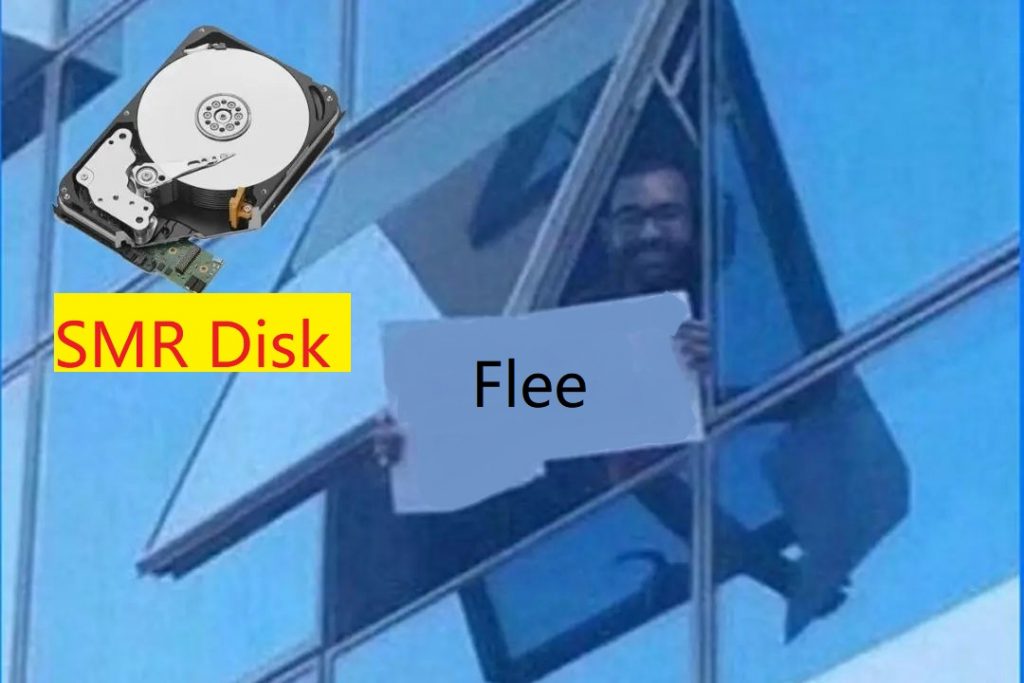 What do CMR and SMR mean?

First, let’s take a look at the technical stages that mechanical hard disks have gone through since their birth. The earliest mechanical hard disks used LMR technology, or horizontal magnetic recording, which can store very little data due to the low density of magnetic particles placed horizontally, with a single disk capacity of 160GB. With the explosive growth of data, this capacity quickly becomes inadequate.

And hard disk manufacturers are constantly innovating to break through the bottleneck, resulting in the advent of PMR technology, or vertical magnetic recording, which dramatically increases the density of magnetic material and allows a single disk capacity of 1.5 TERabytes. LMR hard disks are also obsolete.

With technological innovation, PMR has been further subdivided into CMR (conventional magnetic recording) and SMR (shingled magnetic recording). From a technical standpoint, CMR works by aligning the magnetic poles of magnetic elements representing data bits vertically with the surface of the disk. Disks are written side by side without overlap. Because write heads are typically larger than read heads, HDD manufacturers minimize the size of write heads.

SMR, also known as a Shingled disk, overlaps each new track with a portion of the track previously written, much like roof tiles, hence the name. By repeating the track, the write head becomes thinner, increasing surface density.

Advantages and disadvantages of CMR and SMR

In terms of technical differences, CMR leaves a gap between tracks to avoid data interference between tracks, so that both writing and reading are performed by the magnetic head passing over the track. Its advantages are that there is no unnecessary operation when writing data, the writing speed is fast, and the hard disk life is long. The disadvantage is that the single disk capacity is low.

SMR’s approach is simple. Based on CMR, the gap between the tracks is narrowed so that some of them overlap so that more tracks can fit on the disk, and the capacity can be made larger. However, the problem arises because the area brushed by the writing head is larger than that of the reading head. As a result, the data on the current track will be erased and the data on the next track needs to be backed up first. Therefore, SMR needs to use a large cache to store data.

The advantages of SMR are that the single disk capacity is larger, and the price of an SMR with the same capacity is cheaper than that of a CMR disk due to the decrease in the manufacturing cost of manufacturers. The disadvantage is that when too much data is stored, even small data changes will migrate the data in the sector repeatedly, which will seriously affect the write speed and accelerate the aging of the disk and magnetic head, thus increasing the risk of data loss. That’s why they say, “Buy a tile, don’t buy a shingle.”

Can SMR hard disk be bought?

There are two sides to the problem. SMRS can’t compare to CMR disks in terms of write speed, security, and longevity, but they’re also cheaper and have more capacity. Therefore, the more affordable SMR may be more suitable for the needs of continuous and small erasable operations, mainly video storage and data archiving. However, if it is used as a working disk, game, or system disk, naturally CMR disk is more secure.

However, it should be noted that some manufacturers do not directly tell you whether they are CMR or SMR drives when selling mechanical drives, or even mix the two drives, which leads to some people buying SMR drives without knowing. This kind of behavior is naturally frowned upon, so we should ask before buying. In addition, we can also identify by querying the cache capacity. As mentioned above, SMR requires a large-capacity cache to store data. Generally speaking, if the disk capacity is 1TB, the cache capacity is larger than 64GB, and the SMR disk is most likely to be used; otherwise, the CMR disk may be used.