Data Retention of SSD – Leave it unused and lose data?

Will the data on the SSD be lost, or will the SSD not boot after a few years? Here is a simple analysis and answer. 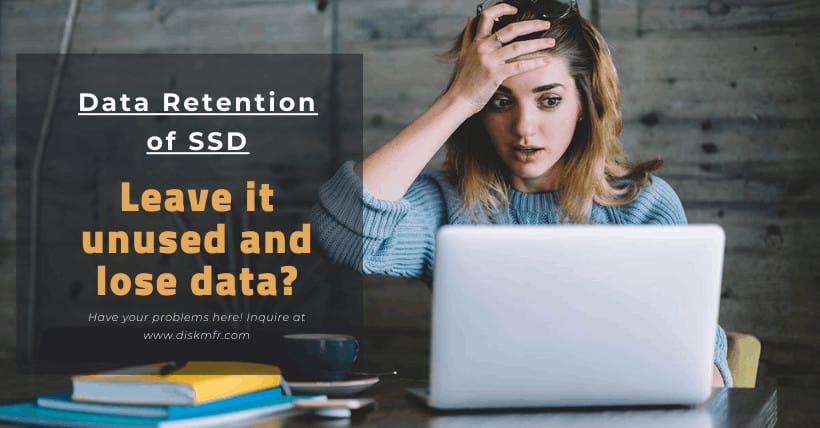 Lately, We’ve often seen people on the forums asking questions like If the SSD is unplugged for a long time, will the data on the SSD be lost, or will the SSD not boot after a few years? Here is a simple analysis and answer.

The reason for this doubt is the “data retention” problem caused by the working principle of NAND flash, the core component of SSDs, which is also a common feature of all NAND flash-based SSDs.

What is Data Retention?

SSDs or USB sticks are the most common “Non-Volatile Memory (NVM)”. It’s easy to see from the name that it’s not data loss at all, just not easy to lose.

According to the working principle of NAND flash, if there is no read/write operation for a long time, the overlying memory cell will gradually lose its stored charge at the floating gate level, resulting in a change in the original stored data, e.g. Data “0” may change to “1” in the figure. When the data errors reach a certain number and exceed the SSD’s error correction capacity, the data will be completely corrupted.

There is a certain amount of time from when the data is written to when it is saved and errors occur. The length of this period is typically referred to as “data retention“.

As temperature rises, electronic activity improves and NAND flash writes better; consequently, the charge stored in the floating gate leaks faster causing a reduction in data retention. Take the enterprise SSD as an example, with a write temperature of 55°C and a memory shutdown temperature of 25°C, its data retention should reach 101 weeks, which is about 2 years; When the storage temperature is increased to 40°C, the data retention shortens to 13 weeks (about 3 months), and the difference between the two is very clear.

At the same time, the wear and tear of NAND flash memory itself is another important factor affecting data storage. Electrons that repeatedly drift back and forth cause irreversible wear and tear on the floating gate tunnel oxide layer, eventually rendering it unable to effectively hold the charge in the floating gate, leading to failure. As the amount of data written increases, the SSD’s NAND wears and tears increases, and the shorter the remaining lifespan, the worse the data retention.

In short, SSDs that remain unpowered for long periods of time run the risk of data corruption or even inability to boot, especially if the SSD is stored in a hot environment and there is little write life left. These situations do not occur with SSDs that are used regularly, see below for specific reasons.

Rewriting data that is about to go bad is an effective way to extend SSD data retention. For example, DiskMF series enterprise SSDs scan data stored in NAND in the background when power is applied and a data error occurs. close to LDPC’s hard decoding capacity, this data is moved, written to a new address, and the original storage space is freed to extend data retention time after SSD power failure.

At the same time, for SSDs with MLC, TLC, or even QLC, store important metadata such as firmware images, FTL mapping tables, AES secret keys, etc. in the NAND area of ​​pSLC mode with higher reliability and perform cross operations. Array and cross-channel backups are also an effective way to fundamentally and significantly improve metadata retention time and reduce errors in this important data.

These operations above may seem simple, but it is not easy to stand out from them. It requires effective data retention enhancement and minimizes write amplification to ensure SSD write endurance and does not affect user operations and SSD latency and QoS. SSD vendors must strike a balance between I/O prioritization, wear leveling, and a variety of data protection and data error correction measures. For users, whether business or consumer, it is important to properly store SSDs that are not in use. and to back up important data.