Flash practitioners have proposed a variety of Wear-Levelling algorithms and Garbage Collection strategies to avoid these problems. 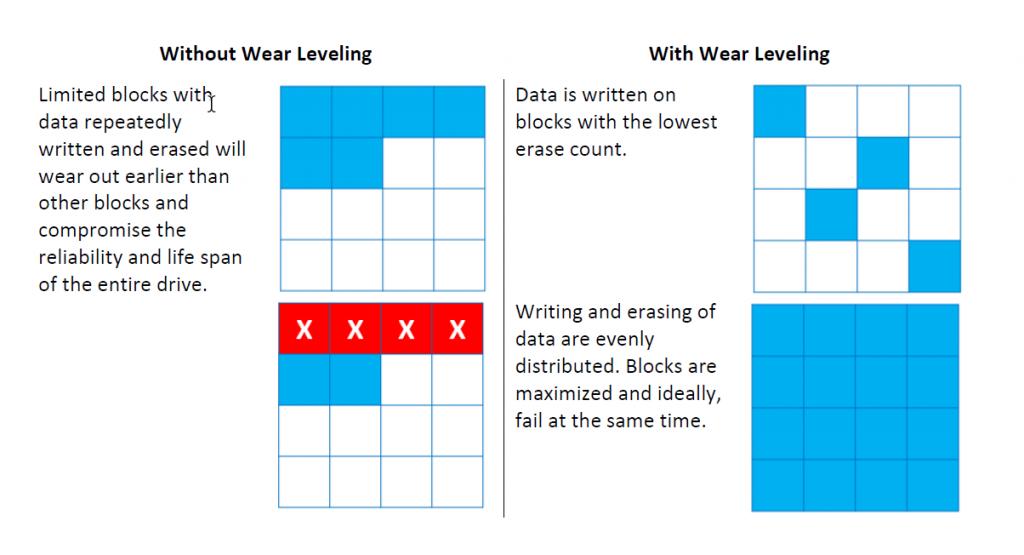 Background of the wear balancing algorithm

The wear balancing algorithm is based on the basic characteristics of flash memory:

FTL typically classifies pages into three types: Valid page, Invalid Page, and Free Page. If a physical page has a logical address corresponding to it, the page data is valid. Otherwise, the page is invalid. Before data can be written again.

Because Erase is a unit of blocks, if the Block to be erased still contains valid pages, the valid pages must be moved before they can be erased. Do you Erase the blocks that have the fewest valid pages or the blocks that have more valid pages but less erasure? Is the number of erasure times of the Block where the effective Block cold data resides considered? Or do I erase some blocks conditionally? Since the garbage collection is directly related to the number of blocks erased, the abrasion balancing algorithm is developed in the context of how each Block can be erased equally, instead of some blocks containing hot data being erased frequently and others being erased rarely.

The so-called wear balance refers to which blocks are garbage collected during the garbage collection process and which mechanism is used to ensure that each Block is erased nearly evenly.

Garbage collection strategies range from the basic Greedy algorithm (select blocks containing the least number of valid pages for collection) to the progressive cost-benefit algorithm (consider the erase frequency of blocks, i.e. the effect of hot and cold data), as follows:

As for the CAT recovery algorithm, the factor of the erasing times of blocks is considered on the basis of cost-benefit. The blocks to be recycled are determined by the algorithm, and the one with the smallest value is selected for recycling. The formula is as follows:

Based on the basic idea of the garbage collection strategy mentioned above, various Controller manufacturers have evolved a variety of different garbage collection algorithms, as well as the analysis methods of hot and cold data.

When receiving a written request, the system determines whether to perform garbage collection based on the current status. In this policy, the system sets a threshold for the available space and starts garbage collection when the available space is smaller than the threshold. How much space needs to be reclaimed each time is up to the Firmware engineer.

The downside of this attesting is that when garbage collection is performed, write requests are delayed, and the more blocks that need to be collected at a time, the longer the delay, which is represented by a sharp drop in write performance. For ordinary users, the system will feel stutter or suspended animation, while for data collection users, there will be a lot of frame loss in the garbage collection process.

DiskMFR uses a more optimized approach in its active recycling strategy: PR-Latency technology. At the same time, depending on the application scenario, with automatically adjustable OP space, the SSD can maintain the same performance even under 100% write/read load, using IOMeter to set a 2MB pattern and 100% write mode for Uninterrupted testing, a week after the direct test performance curve, can still perform as a straight line.

Dynamic wear balance refers to when the need to change some data on a page, the new data is written to erase fewer physical pages, at the same time the original marked invalid pages, dynamic wear balance algorithm’s disadvantage is that if you just write the data to be updated again soon, so, just updated data block page soon become invalid, if update frequently, Undoubtedly, blocks that hold cold data are rarely erased, adversely affecting the overall life of flash memory. The early SSD main control used a dynamic wear balance algorithm, now more research on dynamic and static use together.

There are a lot of algorithms for static wear balance, and no algorithm is absolutely perfect. The algorithms of later generations are always further based on the previous algorithms, and different application scenarios and different requirements will lead to different algorithms.

Current garbage collection algorithms are basically designed around the idea of erasing each Block more evenly. These algorithms are based on the “assumption” that Block wear is exactly the same, but in fact, each page and Block wear state is different. When erasing all blocks on a flash memory evenly, Inevitably, some blocks will become Bad blocks first, while others will wear longer. This is determined by the wafer design process. Under current process conditions, it is not possible to ensure that every Block is identical, and there are bound to be some errors in the wafer, which are uncontrollable and randomly distributed.

Another essence of the non-balance algorithm is: that when the UBER (Uncorrectable Bit Error Rate) of the Block reaches a certain threshold, the MLC mode will be automatically charged to the SLC mode.

The non-balance algorithm involves an important technical problem: how to judge the true wear resistance of flash memory (for example, page1 is 3000P/E cycle, page3 is 5000P/E cycle).

Although the complexity of the actual operation is high (testing is a very time-consuming process and requires constant modification of the mathematical model to make it more accurate), the actual results are far better than those without considering the actual wear resistance of the page. Technical progress often begins with detail and patience.

SSDs are the best practitioners of the barrel theory, and the overall lifetime of SSDS depends on the worst flash, so it’s how you select the most consistent flash that determines how long an SSD can last, otherwise, no matter how good an algorithm is, it’s going to lose out to the weakest flash.

PrevPreviousSSD bad block management and its impact on SSDs
NextWhat are the advantages of using SSDs for industrial computers?Next