SSD bad block management and its impact on SSDs 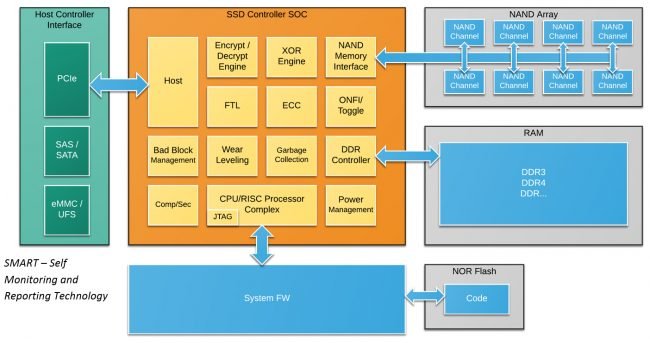 Bad block management is related to SSD reliability and efficiency. The bad block management practices provided by Nand Flash manufacturers may not be very reasonable. In product design, if some abnormal conditions are not considered properly, some unexpected bad blocks will often occur.

For example, after testing many different master SSD found the new bad block due to abnormal power problem is very common, using the search engines search “abnormal power produce bad block” or similar words, will find that the problem exists not only in the testing process, the actual problems happened in the end-user is very much also.

Who manages the bad block?

Not all new bad blocks are caused by wear. If the SSD does not have the abnormal power failure protection function, the main control may misjudge the bad blocks or generate new bad blocks. In the case of no abnormal power failure protection, if the Lower page has been successfully programmed and the Upper page is suddenly powered off, the data on the Lower page will be sent incorrectly. If the number of data errors exceeds the ERROR correction capability of SSD ECC, the data will be read incorrectly. Blocks are identified as Bad blocks by the master and added to the Bad Block table.

Some new bad blocks can be erased. After a new bad block is erased, data erasers may not fail again because the error depends on the pattern in which data is written. If a pattern fails, another pattern may fail.

Percentage of factory bad blocks in the total Device

Bad block scanning basically checks whether the byte corresponding to the address specified by the manufacturer has the FFh flag. If the byte does not have FFh, the bad block is detected.

The location of the bad block identifier is roughly the same for each vendor, but different for SLC and MLC. Take Micron as an example:

To illustrate, borrow a diagram from Hynix Datasheet:

What data is in the bad block? All zeros or all ones? Of course, this may not be true. The factory bad block may be true, but not the new bad block. Otherwise, it is impossible to hide data through a “bad block” :

Can the factory bad blocks be erased?

Some are “allowed” to erase, while others are prohibited by the vendor. “Allowed” erasure only means that the bad block identifier can be changed by sending an erasure command, rather than suggesting that the bad block can be used.

Vendors strongly recommend that you do not erase bad blocks. Once the bad block flag is erased, it cannot be “recovered”. It is risky to write data on the bad block.

In the process of using it, added the bad block determination method

A new bad Block is added to determine whether the operation on Nand Flash is successful based on the feedback result of the status register. When Program or Erase is reported as FAIL, the SSD master will classify the Block as a bad Block.

Bad block tables are typically saved in separate areas (e.g. Block0, page0 and Block1, page1), each time after the power directly reads BBT, efficiency is relatively high, considering the Nand Flash itself will also be damaged, which may lead to the loss of BBT, therefore, usually will BBT backup processing, backup how many copies each is different, some backup 2 copies, also some backup 8 copies, In general, you can use the voting system of probability theory to do the calculation, but at least two.

Bad block replacement refers to using good blocks in the reserved area to replace bad blocks generated during use. If an error occurs on the NTH page in the program, then under the bad Block replacement policy, the data from page0 to Page (n-1) will be copied to the same position in the reserved free Block (such as Block D). Then write the NTH page in the data register to Page N in Block D.

When Bad Block has an FTL will Bad Block address remap to reservation Block address, rather than just skip the Bad Block to the next Block, every time before the logical address writes operation, will first calculate what physical address can be written, which address is Bad Block, if it is a Bad Block, put the address to write data into the corresponding resources?

OP different vendors to the size of the set are different, different application scenarios, for different reliability requirements, OP size will be different, there is a trade-off relationship between OP and stability, the greater the OP, in the process of writing and garbage collection available space, the greater the performance is more stable, shows the performance curves of the smooth, on the contrary, the smaller the OP, performance stability is poorer, Of course, more space is available to the user, and more space means lower costs.

Generally speaking, OP can be set at 5%-50%, and 7% OP is a common proportion. Different from the 2% fixed Block suggested by the manufacturer, 7% OP is not fixed in some blocks, but dynamically distributed in all blocks, which is more conducive to the wear balance strategy.

For most SSD manufacturers that do not have the master control technology, if the product is repaired, the common practice is to replace the faulty device and mass produce it again. In this case, the list of newly added bad blocks will be lost. Losing the newly added bad block table means that the Nand Flash that has not been replaced already has bad blocks. The operating system or sensitive data may be written into the bad block area, which may cause the user’s operating system to crash. Even for a vendor with a controller, it depends on the vendor’s attitude towards the user to save the list of existing bad blocks.