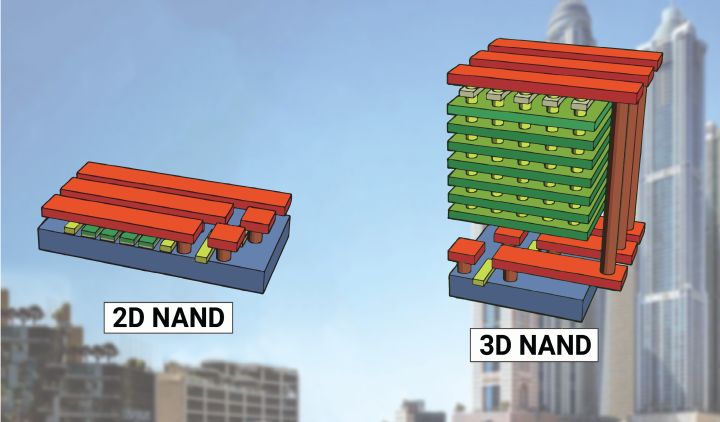 With SSD prices gradually sinking, although there is a trend back up this year, SSDs have captured a large amount of the market with their powerful advantages. With the emergence of cottage SSDs, consumers have a problem when it comes to buying SSDs: How do I buy one? Today let’s talk about flash memory, one of the core components of SSDs.

First of all, SLC is the abbreviation of Single-Level Cell, that is, 1bit/Cell, each cell can only store 1bit, two states, that is, 0 or 1, the highest reliability in NAND, the fastest speed, erase life is about 10W, the cost is much higher than MLC, so the current retail market has basically seen the SLC products.

TLC, as the name suggests, is Triple, 3bit/Cell, each cell can store 8 kinds of states. Reliability, speed, and life are relatively poor. The life span is about 500~1000 times PE. and because Multi has the meaning of multiple, so Samsung also called TLC flash memory 3bit-MLC. in fact, it is just a name used to mislead the public and does not cover the essence of TLC, QLC, and so on.

The 3D flash is a vertical arrangement of NAND cells on a flat surface, which allows for more storage space per unit area. Samsung is also preparing to launch 3D FLASH with 100 or more stacked layers in the future. of course, the stacking method differs from one manufacturer to another.

Since SLC is slightly more expensive, we prefer MLC SSDs when buying SSDs with the same capacity, especially if you want to use it as a system disk, then MLC SSDs are the first choice even if they are more expensive. TLC has now taken up most of the market, so I personally recommend a small capacity MLC SSD for the system and a large capacity TLC SSD for storage.
SSD as a storage disk.

Why does the more advanced the process, the shorter the Nand Flash Memory

This starts with the storage principle of flash memory, where both erasing and writing are based on the tunneling effect, where current passes through the insulating layer between the floating gate and the silicon base, charging (writing data) or discharging (erasing data) the floating gate. (See figure below.) This insulating layer is depleted with erasure. As the process is upgraded, the FG layer will accommodate fewer electrons, and the insulating layer will become thinner and thinner, so the depletion capacity will be reduced accordingly, which is why the life of the particles in the new process is getting shorter and shorter. Take intel, for example, the life of 40nm MLC flash memory is about 5000 times, while 25nm is only 3000 times, to 19nm only 2000 times, and some manufacturers of 16nm MLC flash memory is only 1500 times of life. This same principle also explains why the lifetime SLC>MLC>TLC.

PrevPreviousApplication of solid-state drives in industrial automation
NextNanox, an Israeli start-up, has opened a semiconductor factory in South KoreaNext