NAND has been around for 35years, Where is the Future going? 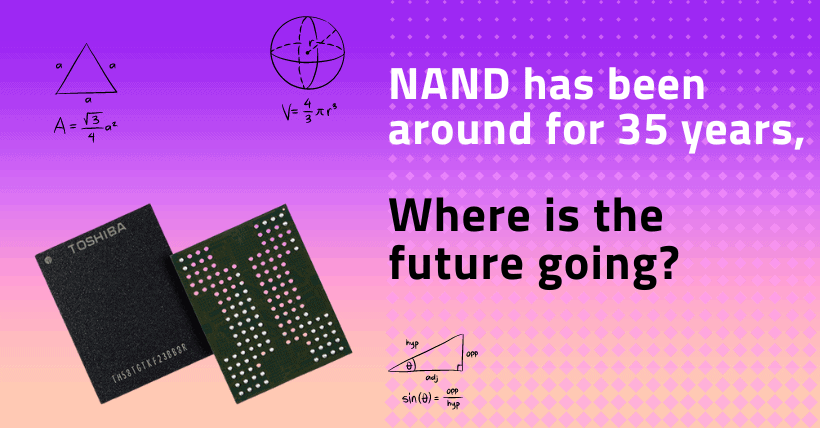 Intel has stopped producing Optane, but KIOXIA is marking 35 years since the NAND flash memory was invented by KIOXIA in 1987 when it was still called Toshiba Memory Corp.

Cameron Brett, Senior Director of Marketing for KIOXIA Enterprise and Cloud Storage, said that flash memory has been around since 1959, but it was the invention of NOR flash memory in 1984 and NAND in 1 that made it possible for the market Breakthrough because NAND offered better scalability, density, and price than NOR.

Flash memory and hard drives are two of the most popular storage media today. Hard drives take up more space and cost less, but solid-state and NAND flash drives continue to gain ground.

NAND-based solid-state drives were first marketed in 1991 as an OEM owned by Blitz. “NAND technology evolved in 1999 with the advent of the SD card for digital imaging,” said Scott Nelson, senior vice president, and general manager. of KIOXIA’s memory business unit.

Flash memory has since begun to revolutionize audio storage products such as tapes and CDs by allowing users to store their entire music library on a portable, handheld device. Flash storage soon made its way back into laptops, giving way to ultra-light, ultra-portable laptops in increasingly compact forms such as M.2.

When flash finally makes its way into data centers, it offers advantages that HDDs cannot offer, such as Performance, especially lower latency and density. Flash memory technology is constantly evolving.

KIOXIA has also expanded its PCIe Gen 5 SSD with the CM7 (also known as the enterprise version of the CD7), KIOXIA’s third Gen 5 hard drive dedicated to data centers. Available in 2.5″ and EDSFF sizes, the CM7 is also the second data center hard drive to use the 5th generation Solid State Drive.

The CM7 is also the second hard drive in the data center to use fifth-generation BiCS 3D TLC NAND.

Jeanette from research firm Trendforce noted that the PCIe Gen 5 interface is not yet fully ready for large-scale deployment, but vendors like KIOXIA will be ready for the transition.

Tom Coughlin, President of Coughlin Associates, said that there will be some notable opportunities for faster SSDs as Intel Optane is phased out, and we’ll have a chance to see more SLC products being used for speed increases.

KIOXIA’s FL6 line adopts SLC NAND for higher performance and durability. In its second FL6 generation, KIOXIA introduced the MLC version, which will bring higher density and lower cost. Currently, KIOXIA’s MLC-based FL6 product is not commercially available, and KIOXIA has not announced its future delivery.

KIOXIA is also working with the Linux Foundation to release software-enabled flash memory technology via the open-source Linux API and KIOXIA special hardware. Flash technology to realize its great potential.

Jeanette pointed out that the SAS and SATA protocols are still the main protocols for hard drives and many SSDs use these protocols as well. SSD manufacturers have expanded and really embraced PCIe and NVMe.

For his part, Coughlin said a greater focus on PCIe and NVMe makes sense for some markets, but like anything new, it will take time. Many hard drives use PCIe and NVMe, but there’s still room for traditional interfaces like SAS. SAS won’t go away for a while, Coughlin says. The need for SAS is still there and far from gone.

PrevPreviousWhat is NVMe and Its Features?
NextWhat Happened this week in China after U.S. Chip Act?Next