The IoT is silently changing six Aspects of Life

Today, more than 7 billion Internet of Things (IoT) devices are installed worldwide, and that number is expected to grow to over 30 billion by 2025. 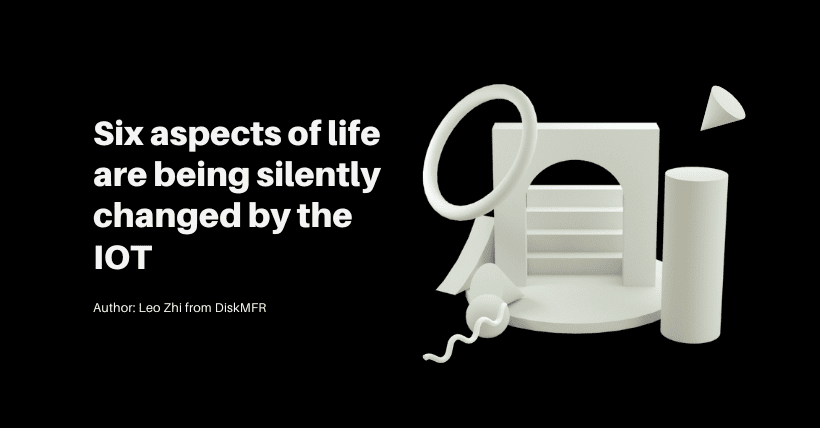 The innovation and application of IoT technology have penetrated all aspects of people’s lives, quietly and profoundly affecting people’s work and life.

Today, more than 7 billion Internet of Things (IoT) devices are installed worldwide, and that number is expected to grow to over 30 billion by 2025. Global spending on IoT initiatives will also surpass $1 trillion by 2023. Like other emerging technologies, IoT is rapidly converging. “See the trends, see the future”, we have compiled the six most influential trends that will influence the Internet of Things in the next two years.

AIoT, the combination of the Internet of Things and artificial intelligence

Artificial Intelligence (AI) and the Internet of Things (IoT) are complementary and interdependent relationships that, when combined, can deliver previously almost unimaginable information, a combination known as AIoT.

As the installed base of IoT devices has grown in recent years, the data generated has also provided essential “training material” for using artificial intelligence and machine learning. At the same time, artificial intelligence is also continuously “digging” data by analyzing the massive data collected by IoT devices, making the IoT smarter and improving efficiency.

In 2019, according to Gartner, connected devices generated 18.3 ZBS of data, while only about 10% of IoT projects use AI to generate insights. By 2025, connected devices will generate around 73.1 zettabytes of data, roughly four times the amount of data generated in 2019. And without effective AI, the vast amounts of data collected by these IoT devices would be virtually useless or wasted.

In retail today, companies like Walmart and Amazon are using a combination of the Internet of Things and AI to manage inventory and make supply chains more efficient. FedEx is also using the power of the tech giant’s AI to mine data from the internet. -of-Things sensors on their delivery trucks to improve overall operational efficiency. Although there have been successful cases, the AIoT market is still in its infancy and will continue to evolve in the future.

With the growing popularity of the IoT in different fields, the variety of connected devices and devices from vendors also poses new challenges for operations and maintenance. At the same time, due to the complexities of IoT data collection and analysis, it is inevitable that some applications will be needed to help inexperienced companies overcome this challenge. In 2021, IoT software spending increased by more than 24%. 32 percent of total spending, IoT software spending recovers quickly, reaching 26 percent.

Currently, containerized applications are one of the main ways to achieve this goal. That is, by virtualizing the entire software ecosystem in a way that developers can observe and understand the different operating systems working together within an organization. particularly important for large-scale deployment of IoT applications.

And it’s not just startups or high-tech companies working on these applications, automotive companies like Volkswagen are also working on IoT applications. Take your We Connect app, an app that allows car owners to control and monitor their cars. Use embedded IoT devices. At the same time, some of the largest cloud companies (Microsoft Azure and AWS) are growing faster than we thought.

The COVID-19 pandemic is also creating new demands and opportunities for the Internet of Things due to its impact on the way healthcare is delivered. In the US alone, there will be around 36 million online health consultations annually by 2020. However, that number rose rapidly after the start of the COVID-19 pandemic, with around 1 billion telemedicine consultations by the end of 2020. While that number has slowed as the outbreak progresses, it’s still well above pre-pandemic levels.

McKinsey estimates that approximately 20% of outpatient and office visits can now be digitized. The number of devices networked in the Medical Internet of Things (IoMT) gives an idea of ​​how quickly the market is growing. There were approximately 4.5 billion IoT devices in circulation in 2015.

For example, remote monitoring of elderly patients, a maturing area of ​​IoMT, could reduce the number of ineffective visits to doctor’s offices and solve health problems before they arise. This sudden need for IoMT has opened up a whole new set of possibilities for the Internet of Things.

Industry 4.0 is increasingly dependent on the Internet of Things

Industry 4.0 (or the Fourth Industrial Revolution) refers to the vast improvement and enhancement of manufacturing and industry through widespread automation and increased efficiency. An important part of this concept is the Internet of Things. Without the Internet of Things, the large-scale data collection and monitoring required to improve industrial capabilities would be impossible.

Out of the four main components of Industry 4.0 (Internet of Things, Artificial Intelligence, Cloud Infrastructure, and Big Data Analysis) where data collection and factory monitoring are the basis of each component, the importance of the Internet of Things is equally greater. obvious.

Industry 4.0 improvements are projected to add approximately $7.1 trillion to US GDP by 2030. Much of this will be the result of the widespread adoption of the Internet of Things.

The Internet of Things will reshape global supply chains

The COVID-19 pandemic has made global supply chains increasingly complex and volatile. There have been amazing improvements in transportation and delivery in the past. For example, manufacturers and logistics companies know that certain product components have left a port or are on their way to a certain country. However, the epidemic has disrupted the global supply chain to some extent, and in the process of rebuilding it has introduced new requirements of “granularity” and “precision”, i.e. H. every link in this complex supply chain needs to be tracked. and closely monitored to reduce the time to detect and resolve errors and anomalies and improve the resilience of the supply chain. Improve customer satisfaction.

That’s why 70% of global retailers are trying to make their supply chains IoT-compliant. The international courier company DHL, for example, is already dealing with these problems. The company has promised to have a full fleet of 10,000 IoTs. Trucks by 2028. Trucks will be equipped with sensors that will halve delivery times. Similarly, UPS is heavily dependent on IoT devices, with around 100,000 IoT tracking devices currently installed in its shipping facilities. These devices generate 60 million messages per week.

Because the Internet of Things is so important to a country’s infrastructure or the health of its citizens, it also faces serious cybersecurity threats. It is estimated that 57% of IoT devices are vulnerable to malicious activity. Additionally, up to 83% of medical imaging devices on the market today run on outdated or outdated operating systems, leaving the entire network vulnerable to attack.

Internet of Things devices collect massive amounts of data and 98% of the data they process is not even encrypted. The scope is so broad that consumer privacy could be an issue, especially as much of this data is sensitive. Health Data.

The development of the Internet of Things will have to face the problem of data security and privacy protection.

Words in the End

These are six emerging trends in the evolution of the Internet of Things. As you can see, the Internet of Things is rapidly transforming many industries (e.g. healthcare), manufacturing, and many parts of the supply chain. At the same time, the IoT industry will have to deal with increasingly complex network security and privacy issues to hope for faster development.