Using partial NAND in solid-state drives to mimic SLC operations, how can we achieve the benefits of capacity, cost, and write speed? 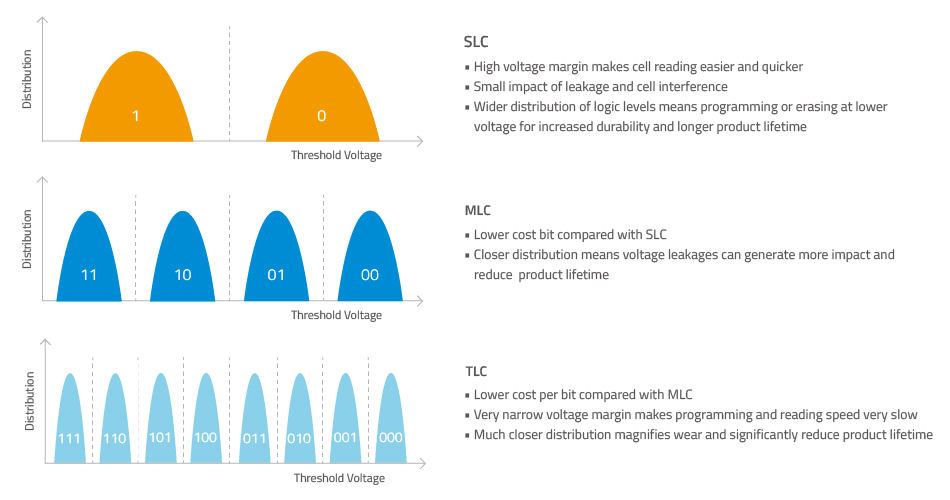 In order to make the SSD capacity can be made larger, and make the price more affordable, currently the mainstream retail SSD most of the uses TLC or QLC.  So we’re using partial NAND in SSDS to mimic the SLC, so how do we get the best capacity, cost, and write speed?  Yes, this is the SLC Cache.

As mentioned above, SLC Cache essentially simulates the working mode of SLC with particles such as MLC and TLC. TLC is used to simulate the working mode of SLC for example. TLC has eight states, while SLC has only two, so if TLC is also marked as two states, that is, 000~011 is considered to be 0, and 100~111 is considered to be 1, that is to say, only the highest state is judged, then the control is easier, and the speed will be greatly improved, and the durability is also guaranteed. This is the basis of SLC Cache acceleration.

As the name implies, the SLC Cache is planned based on the remaining capacity of the SSD. The advantages of this model are if the capacity is big, there will be a very large cache redundancy, under the conditions of hard disk space is not very saturated, write data will be very beautiful, downside is that with the increased use of hard disk space, the performance of the entire hard drive will gradually decrease as the utilization, the experience of using the entire hard disk consistency is not strong. Of course, with the current intelligent solid-state master control, the master control will be more reasonable to divide space, to ensure the use of performance as consistent as possible, and the SSD capacity is increasing, the hard disk has more space for master planning, so the problem of dynamic policy lag is greatly alleviated.

What are the benefits of SLC Cache?

If you know anything about computers, you probably know that data on a hard disk needs to be transferred to memory, and then the memory needs to be transferred to other hardware. However, software or games often need to be installed quickly, which requires the hard drive to be able to write explosive power. Using a portion of the SSD storage space as an SLC Cache can improve the SSD’s ability to write explosive power, so software and games can be installed faster.

When user data is written to the SLC, there is no possibility that Upper Page or Extra Page will corrupt Lower Page data.

As a caching technology, SLC Cache compensates for the loss of speed as particle storage density increases. Provides solid-state drives with excellent burst write performance, as well as capacity and cost advantages. In addition, with the gradual improvement of master control capability, the peak performance of SSDS with SLC Cache can be maintained for a longer time in the future.